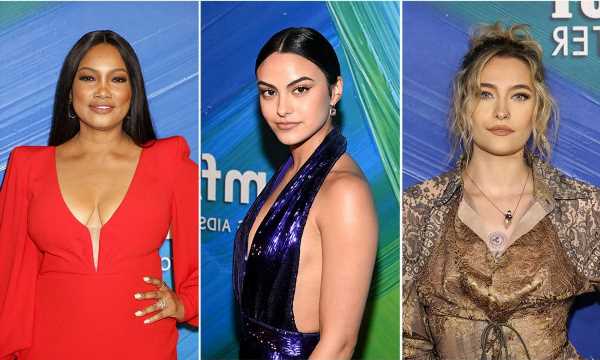 The stars were out in force on Thursday night with the likes of Paris Jackson, Camila Mendes, and Meg Ryan taking to the red carpet at the 2021 amfAR Gala in Los Angeles.

The eleventh annual event, held at the Pacific Design Centre, is aimed at raising funds for AIDS research, prevention, education, and the advocacy of AIDS-related public policy, and fashion designer Jeremy Scott and TikTok were the honorees.

Jeremy, the head of fashion house Moschino, called the honor "overwhelming," and that he didn't feel "worthy", and admitted he was "just trying to get through this evening without crying".

He told HELLO! that when it came time to give his speech, he had words prepared but his biggest concern was being "able to utter them without crying!"

Riverdale star Camila looked breathtaking in her purple sequin frock by Rodarte, which featured a low-cut front and exposed back.

To All The Boys actress Lana Condor was a show-stopper in her off-the-shoulder, metallic silver Moschino dress and Jimmy Choo shoes.

Jeremy designed his own suit and Brazilian singer Anita's dress, who joined him on the red carpet.

Inspired by nursery rhymes, he told HELLO! that he "thought about things that were nostalgic and cosy and comfortable and lovey dovey but turn it into elegant and glamorous!"

"I hate to say this but people don't know about causes until people like us get out and talk about it and amplify the message and that's why we are here," he shared.

"It's very important for us to come out and post on social media and make people aware of this organisation that has helped literally millions of people."

Emily wore a dark black Dries Van Noten gown with tiered skirt, and she praised the organization for also working to eradicate COVID-19 and making "some serious advancements" with vaccines.

Meg made a rare red carpet appearance for the special evening, looking gorgeous in a sleeveless shimmery black cocktail dress.

RELATED: 50 most show-stopping looks at the 2021 Met Gala