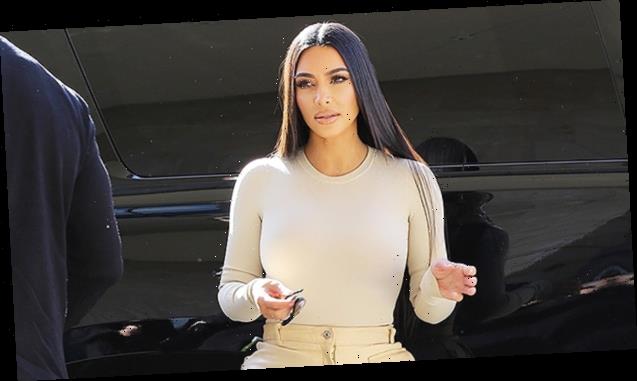 After donning long, heavy braids, Kim Kardashian has returned to her pin-straight Cher-inspired hairstyle. She matched it with fringe western-wear leather pants while filming ‘KUWTK.’

Kim Kardashian is back to her Cher-inspired hairstyle that looks so perfect on her. She channeled the icon during a trip to a Woodland Hills, CA Nordstrom with Scott Disick, 36, on March 6. A Keeping Up With The Kardashians film crew accompanied the pair throughout their day. Her locks were pin-straight and went nearly to her waistline. It’s a look that Kim has returned to time and time again, as it’s an homage to her idol, Cher, 73. Kim had worn several different hairstyles during the recent Paris Fashion Week, including a shorter straight bob and long heavy braids that she rocked for husband Kanye West‘s Yeezy Season 8 fashion show.

Kim had worn her hair slightly wavier the day prior, when she was photographed shopping at a CVS store with none other than David Letterman, 72. It was presumably for his Netflix interview show My Next Guest Needs No Introduction with David Letterman. Fans famously were given a look inside Kim and Kanye’s minimalist mansion when Kanye, 42, appeared as one of David’s subjects in a 2019 episode. Now it appears it’s Kim’s turn to allow Dave to delve deep into her life.

For her trip to Nordstrom, Kim rocked a western-wear look. She wore creme colored leather pants with fringe accents down the sides coming out of silver cowboy-style metal circles. Since the pants were so eye catching, Kim kept the rest of her outfit simple. She wore a long sleeved tight creme top and matching snakeskin boots. While the KKW Beauty boss had a fully-glam face of camera-ready makeup, she went accessory free.

Kim’s pants look like they could have been inspired by the cowboy-themed 28th birthday party her sister Kylie Jenner, 22, threw for her assistant Victoria Villarroel the night before. Guests to the bash at Santa Monica’s SHOREbar donned cowboy boots and hats, as well as western-wear inspired outfits. While Kim wasn’t pictured at the party, maybe she got some inspo from the theme.