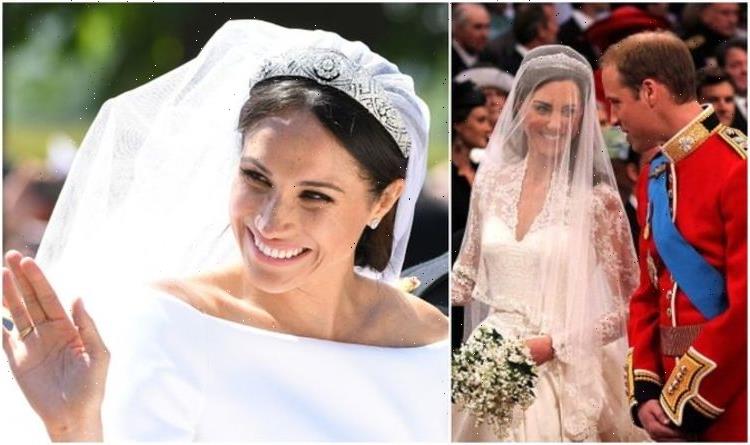 Meghan Markle’s wedding dress is estimated to have cost £110,000, and the Duchess of Sussex paid for it herself. Although this is still quite expensive, it was cheaper than iconic royal wedding dresses like Princess Diana’s from 1981 and Kate Middleton’s from 2011. Meghan’s timeless gown was designed by Clare Waight Keller, of Parisian fashion house Givenchy.

The fashion house spent 3,900 hours embroidering Meghan’s 16-feet long veil with the national flowers of each of the 53 Commonwealth countries including real crops of wheat.

The dress was created using double-bonded silk cady cushioned by an underskirt of triple silk organza.

Meghan and Clare worked closely together to design the dress to show a “timeless minimal elegance”, according to a Kensington Palace announcement.

Kate Middleton’s dress, on the other hand, was the most expensive wedding dress ever worn by a member of the British Royal Family.

But unlike Meghan, Kate did not pay for the dress herself.

The Duchess of Cambridge’s wedding dress for her wedding to Prince William in 2011 cost her parents, Carole and Michael Middleton, who footed the bill, £250,000.

It was made in collaboration with Sarah Burton of Alexander McQueen, with a Victorian bodice.

It also featured a train stretching almost nine-feet long with 58 gazar and organza covered buttons on the back and rouleau loops.

According to Joanna Marschner, Senior Curator of the Historic Royal Palaces, Kate had to choose an extremely impressive dress.

She said: “The dresses have had to grow as the media expectation has grown.

“Television cameras in Westminster Abbey have meant that those dresses are going to have to live up to those venues and indeed be of a design excellence to bear infinite scrutiny.”

“It cost approximately £110,000, which is over three times the average American’s annual income and the Duchess paid for it herself.

“The Duchess, a massive advocate of gender equality and female empowerment chose Givenchy for her big day with Prince Harry because she wanted to honour British talent and the visionary Claire Waight Keller, who happens to be the first female artistic director of Givenchy.

“While the Royal Family covered an estimated £32million for the Sussexes wedding, it comes as no surprise that the Duchess – who had been paying for her own clothes since the announcement of her engagement to Prince Harry – paid for her own dress because she has enjoyed a very successful acting career.

“Kate Middleton, the Duchess of Cambridge’s regal Victorian wedding dress for her wedding to Prince William, was paid for by her parents, Carole and Michael Middleton, who run a successful party supplies business apart from inheriting familial fortunes.

“The Alexander McQueen creation cost around £250,000 and was the Middletons’ generous gift to their oldest child, the future Queen of England.”

Princess Eugenie’s dress was the second most expensive royal wedding dress, who tied the knot with Jack Brooksbank in 2018.

She wore a £200,000 design by British designer Peter Pilotto and Christopher de Vos.