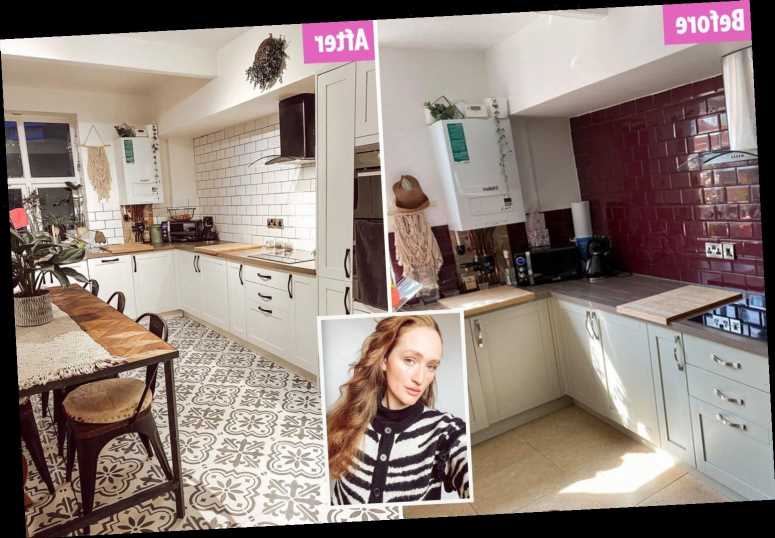 PUTTING up with a kitchen you dislike can be a serious mood killer, but if you're handy with a paintbrush you can give it a total refresh without breaking the bank.

And that's exactly what Rachel Marston, 27, did and transformed her “eyesore” kitchen into a rustic farmhouse inspired space for just £150 – after being quoted an eye-watering £15k. 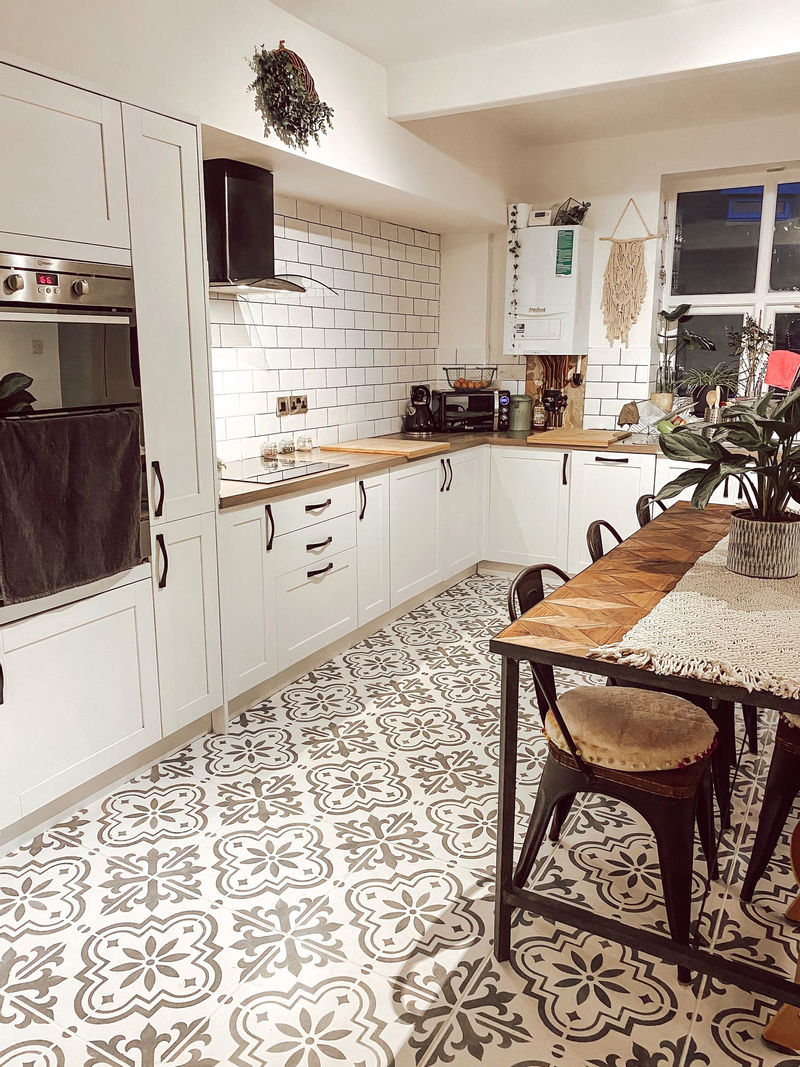 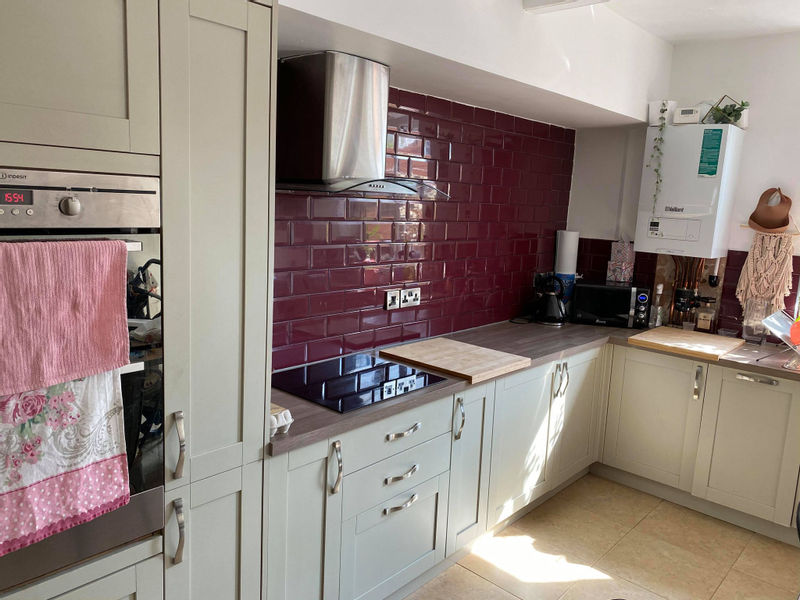 The fashion and wedding photographer who lives with her partner and two children (aged 2 and 7 months) in Mossley, Manchester, took her time on the project, spreading the work over five months to get it exactly how she wanted.

The results were well worth it, though,with Rachel putting her stamp on the space while saving approximately £14,850 – the cost of a new fitted kitchen she had her eye on.

“We got the keys to our new house in August 2019, but before we could make a start on renovating it more to our taste, we learned that we had to pay for a full roof retile and a new boiler,” Rachel told money-saving community LatestDeals.co.uk.

“After that, there wasn’t much money left over for a new kitchen. 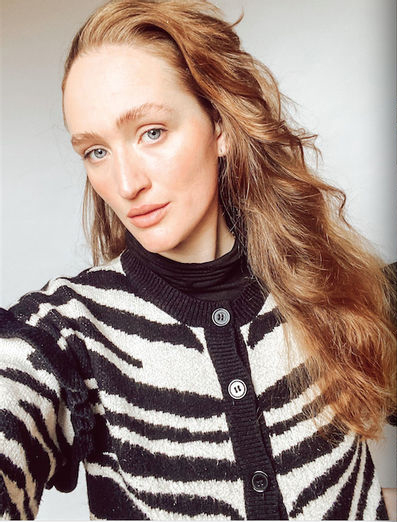 “We researched how much it would cost us to get a new kitchen and we were looking at £15,000 for the style we wanted,”said Rachel, who posts about her home renovations on Instagram.

And adds: "“This wasn’t in our price range.

“We thought we’d be happy with it for a couple of years until we could afford a new one, but we were wrong. The more I cooked in it, the more I hated it.”

It was the red splashback that pushed Rachel over the edge and she was desperate for a change. 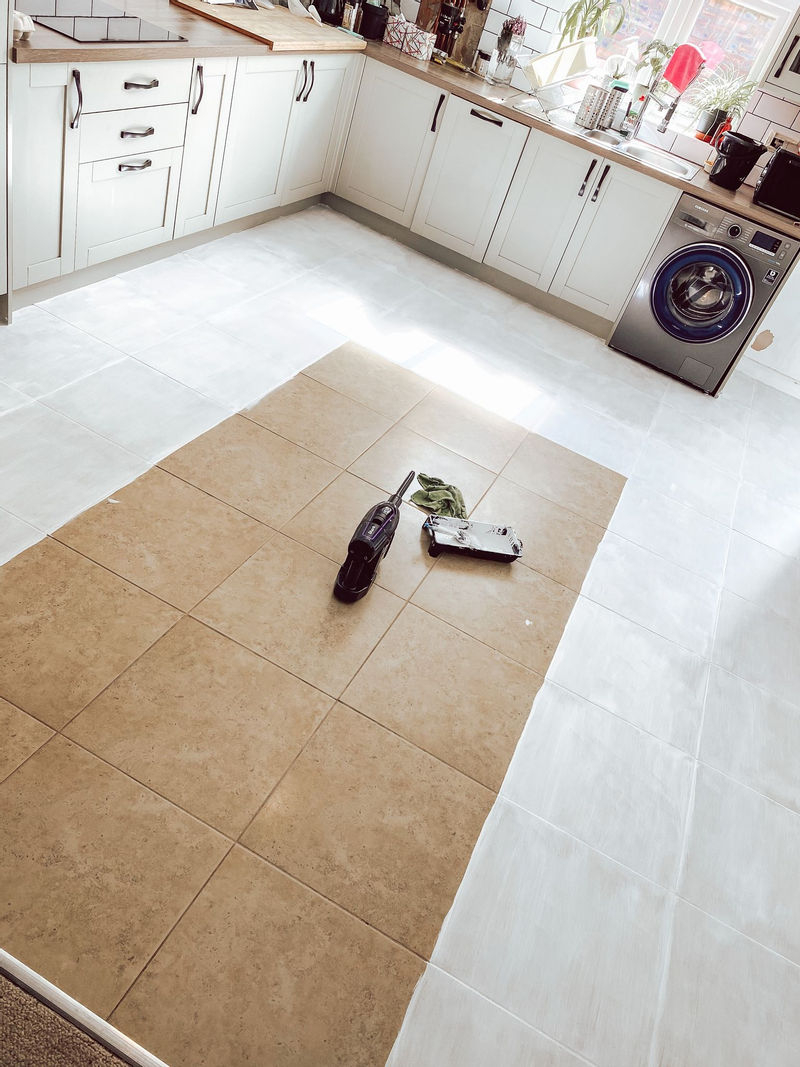 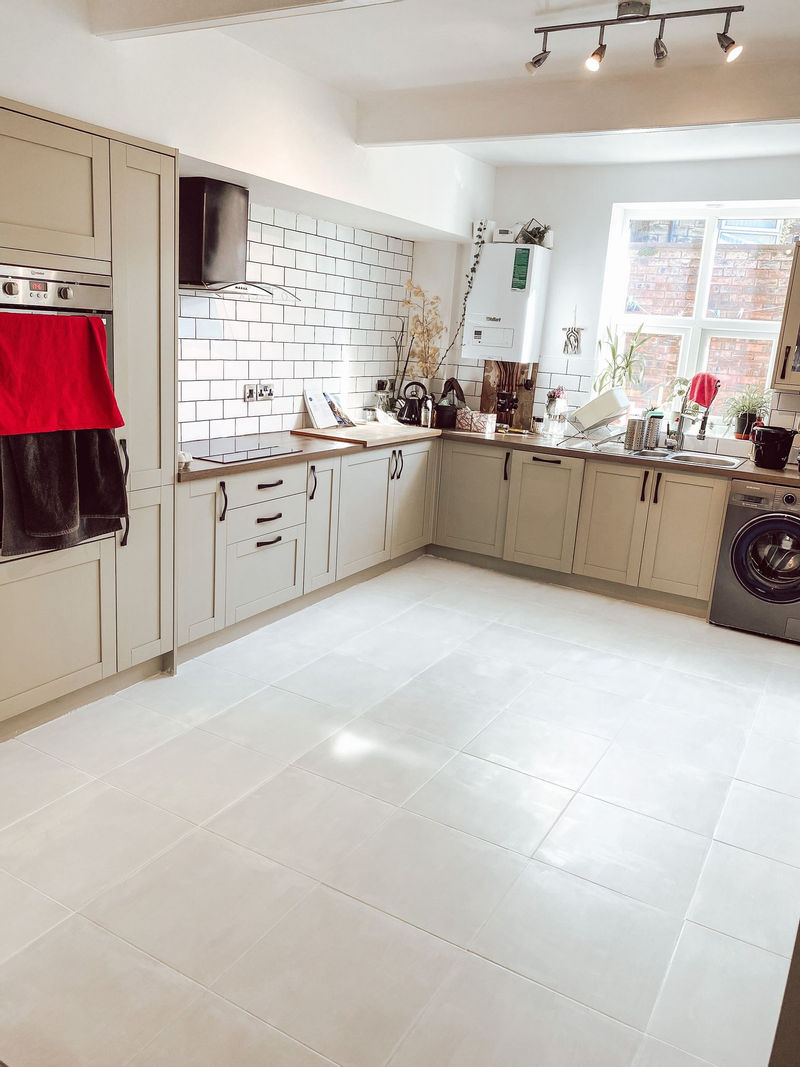 “I was sick of the sight of those red tiles,” she said. “They really were an eyesore – for me, at least.”

Rachel’s main goal was to lighten up the space while taking a style cue from rustic farmhouse style kitchens.

“The kitchen always seemed so dull and dark,” she said. “I wanted to brighten it up so it was a lighter space to cook in.”

As the existing kitchen was in good order, using paint for a refresh seemed like the obvious choice.

The kitchen always seemed so dull and dark. I wanted to brighten it up so it was a lighter space to cook in.

Rachel compiled the £150 kit she needed to carry out the job: Frenchic Al Fresco paint, a large Frenchic paint brush, Frenchic finishing coat, a paint roller, black matte spray paint, a black grout pen, a floor tile stencil that was exactly the same size as the existing floor tiles, a couple of stencil brushes, and plenty of masking tape.

She started on thecabinet doors, and explained: “I prepped the cupboard doors by using sugar soap spray and giving them a good clean.

“Next, I used a medium grit sandpaper to give them a light sanding down. I then washed them once more before starting the painting.

“I started by using a spray-paint gun, but I wasn't getting the result I wanted so I switched to hand painting using a special chalk paint brush. 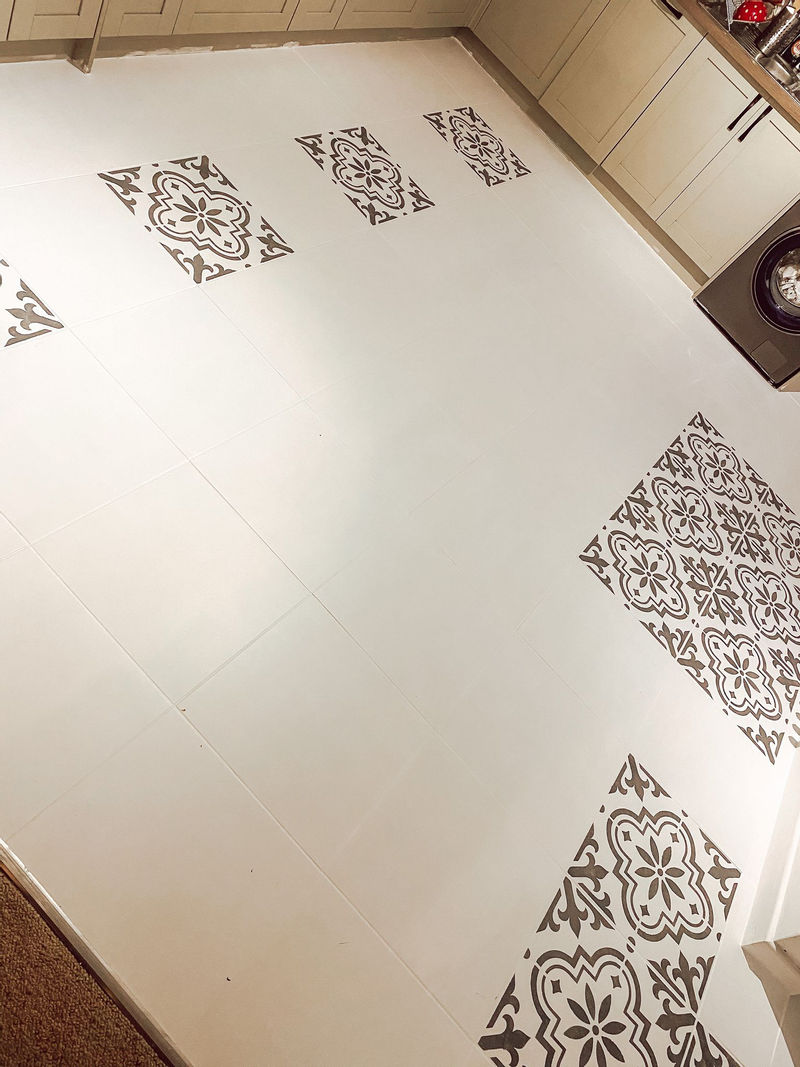 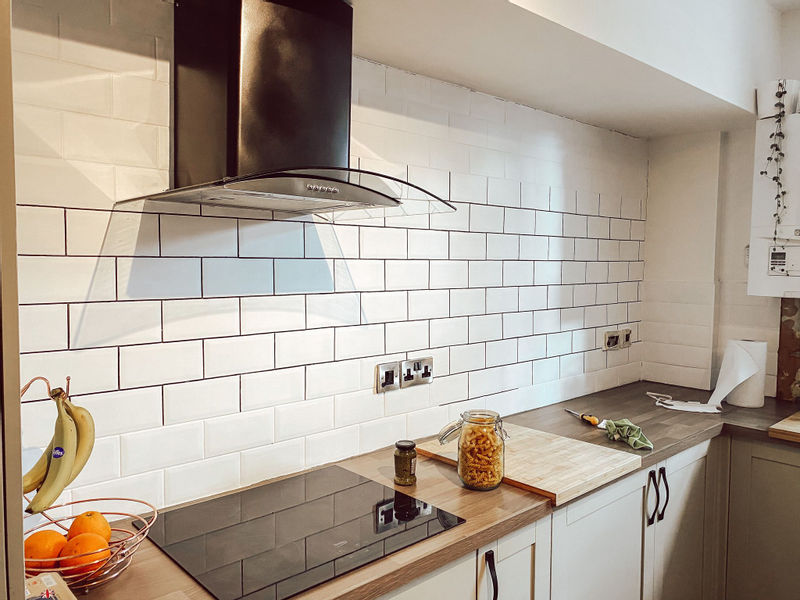 "I decided to keep the doors on the cabinets, rather than removing them. I tackled three to four doors at a time, as having two small children around meant that doing the full kitchen in one go wasn’t an option.

“You need to build up chalk paint with thin layers, and lots of people do their last coat with a paint roller for a smoother finish. However, I like the rustic look so I stuck with a brush.”

Rachel took a similar approach to the floor tiles and splashback, using sugar soap to clean them before giving them a light sanding down.

Soon enough, that bold red splashback was now a stylish shade of white called Dazzle Me! accentuated with black grout.

She used the same shade of paint for the kitchen cupboards and as the base for the floor tiles. 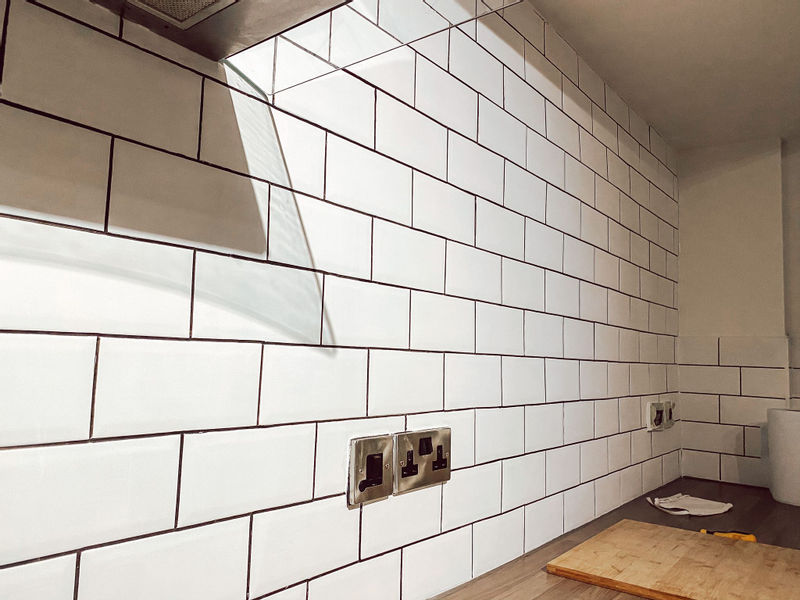 “The floor tiles were by far the biggest job. I had to paint them white before starting the stenciling,” she said.

“This can be quite tricky to do, so I did a few trial runs on tiles underneath the stairs where no one would see them if I made a few mistakes.

“The trick is to use a very small amount of paint – I used a shade of grey called Greyhound – and to dab it on with a stencil brush. This helps you to avoid any excess paint, which tends to bleed under the stencil and doesn’t look good.”

Once the design was complete, Rachel sealed it with Frenchic Finishing Coat.

The floor tiles were by far the biggest job. I had to paint them white before starting the stenciling.

“I removed all the handles and the cooker hood, placed them on some scrap cardboard outdoors, and then sprayed them. I left them to dry for an hour before attaching them back on.

“Black matte hardware is having a style moment,” she continued. “When we can afford to do the bathrooms, they will all have matte black taps and shower fittings. I just find it much more attractive than silver. Plus, it makes a statement."

She said: “The table and chairs are from Red Brick Mill, which I got from the clearance section. 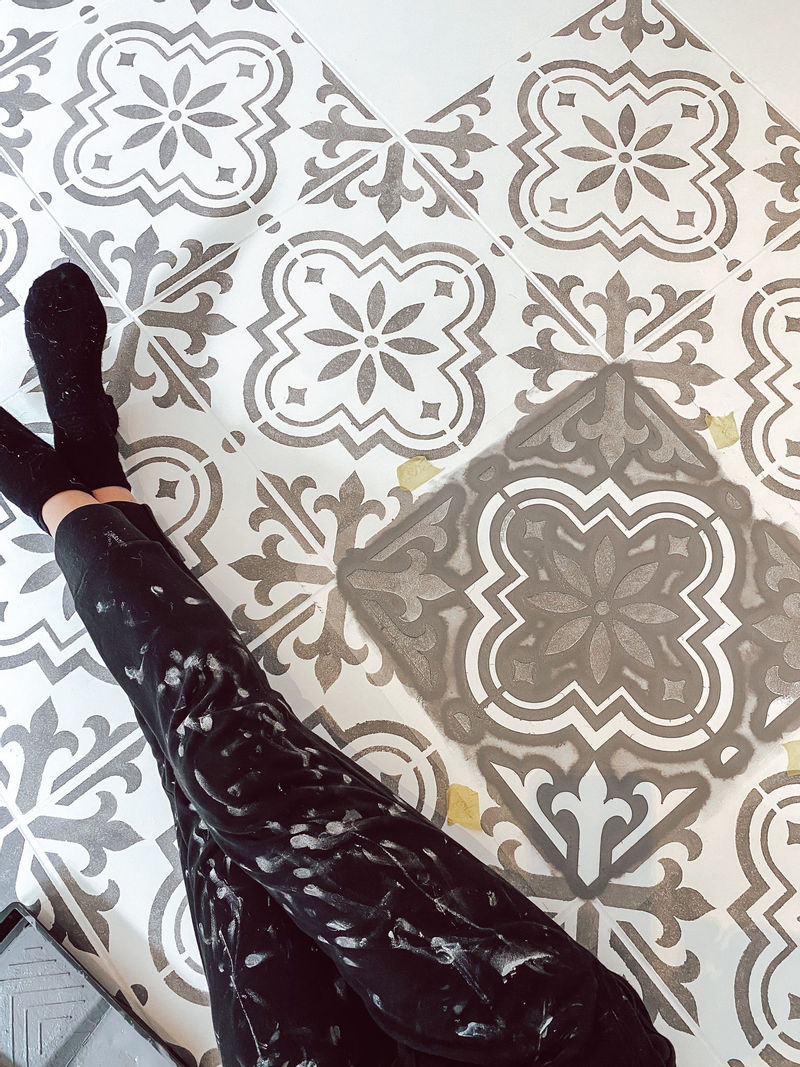 “I bought the egg basket from my local garden centre in the sale for about £2 and the antique flour tin is from my favourite local charity shop, Emmaus.

“I made the wreath on the wall myself and bought the wooden one from the garden centre and wrapped some faux eucalyptus around it.

“I still want to add a few more decorative touches, however, such as a couple of rustic wooden shelves where there is space on the wall tiles.”

Rachel is thrilled with the end result – and with good reason as it's incredible.

“This was my first big DIY project and it's better than I expected, especially considering I didn’t have to spend thousands to get the kitchen looking how I wanted it,” she said.

This was my first big DIY project and it's better than I expected, especially considering I didn’t have to spend thousands to get the kitchen looking how I wanted it.

“I was really flexible with the timescale, as my kids are young so I couldn’t devote large chunks of time to it. I completed it step by step, as and when I could, which is why the makeover took around five months in total.

"The floor took the longest – seven days in total – and I often worked into the night until 3am just to get it finished, as I wanted my kitchen back up and running but it was worth it in the end.”

Tom Church, Co-Founder of LatestDeals.co.uk comments: “Rachel’s kitchen looks super stylish and it’s amazing to know that she achieved it all on a £150 budget.

“Giving kitchen cupboards, floor tiles and splashback a new lease of life with a lick of paint can make a big difference on a little budget.

Meanwhile, this savvy mum completely transformed her kitchen without help for only £60 with Wilko paint and bargain vinyl.

Plus this mum transforms rundown ‘drug pit’ into a plush modern family home for just £5k as she shares jaw-dropping makeover pics.

And this couple transform dark and gloomy pad into a stylish home for £6k – despite having NO DIY experience.