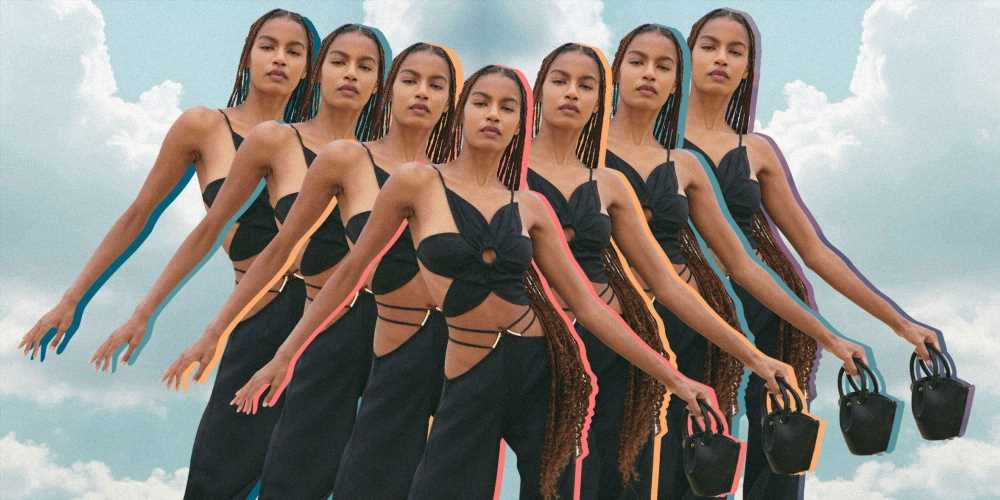 "Here's my little reminder that if you want the dress, go and get the dang dress," a blonde woman named Tiffany Kohut says in a TikTok video. She's pointing to a picture of the viral brand Cult Gaia's Shannon dress which she had recently purchased to wear at her wedding reception. Despite her average viewership of around 1K per post, this video has a whopping 365K. It's a pattern that many creators, both amateur and professional like Kohut — she's a social media manager and blogger — have experienced when they post about viral clothing or fashion brands on their personal pages.

"So many people turn to social media for fashion advice and inspiration now, and the videos on the TikTok For You page can prove it," Kohut says. And she's right. If you click the #CultGaia hashtag in the caption, you'll discover 2.1 million views on videos about pieces from the brand. The Serita dress in particular, a fitted knit maxi with side cutouts that create a bra silhouette with an open back, is a main feature on the platform. Some videos show people opening up the branded box and trying on the dress for the first time, gasping as they catch a glimpse of themselves in the camera's eye. Others show a popular "dupe" from Amazon that costs hundreds of dollars less than the original. It's real-time reviews from millions of peers making authentic-feeling videos. Why wouldn't you trust that more than an ad or a sponsored post? The most incredible part about fashion-tok's viral capabilities is that it's not limited to any one brand, person or even item. You can see a dress go viral and suddenly your entire For You page is filled with videos of people from all around the world wearing it. For the brands, it's a huge opportunity to be propelled into the zeitgeist in a way that no other social media platform pulls off. Sure, you can get an influencer promoting your clothing on Instagram, and that definitely drives sales, but it doesn't translate to thousands, sometimes hundreds of thousands, of videos of everyday people wearing your item and linking to it as well.

According to CNBC, social ecommerce sales are expected to rise 35.8% in 2021 to $36.62 billion. Though they don't break this down by platform, it's fair to say that TikTok is driving a large portion of this increase because just one year ago, it wasn't even considered in the numbers. That's why TikTok's influence on fashion feels so tectonic — it's still relatively new. The platform launched in the United States in 2018, and in 2020, when the Coronavirus pandemic pushed most people inside and away from their normal lives, there were 2 billion downloads and 850 million monthly active users. Gone were the days when influencers were the only ones getting in on the action of fashion content, and now anyone who wanted to could be part of it.

"When the pandemic happened, we were unable to spend time with our friends and family. So there was this need to assimilate in any way possible. People use style to do that," explains Dr. Dawnn Karen, a fashion psychologist and author of Dress Your Best Life. "We used to dress for others, like your boss, your family or your friends. However, when we weren't seeing each other any more, we had to dress for ourselves. We were forced to look in the mirror and think about what clothing means to us." She goes on to say that TikTok was the perfect place to marry a newfound individualism with our need for validation and community through clothing, which didn't go away just because we were stuck at home and barely getting dressed. "The continuous scroll of TikTok also creates this FOMO, you keep seeing the same thing over and over again, offering a reinforcement that you need to buy that dress. All of these people feel normal, like you can trust them," Dr. Karen explains, adding that it's something of a self-fulfilling prophecy. "If you keep seeing something over and over, you will feel inclined to participate."

The platform's algorithm makes it so that once you are into something, you see a LOT of it. If you wanted to buy a dress, try-on videos reveal it from every possible angle and on people with vastly different body types — some who offered colorful commentary and answered questions you might have about the item — allowing you to experience it in a more 360-degree way than a retail site provides. When you watch several in a row, it's like you already own the dress; you're hanging out with it, seeing it live.

Even though TikTok seems to have equalized who gets to be a fashion content creator, there's no doubt that traditional influencers still play a major role in which brands and styles break through. "The creators are starting the trends still," Ali Berman, Partner & Head of Digital Talent at United Talent Agency stated over a Zoom call. Berman represents some of the biggest creators on TikTok including Charli and Dixie D'Amelio. "It's not a For You page if there isn't a video breaking down something Emma Chamberlain wore," she says. For those unfamiliar, Chamberlain is one of the top YouTubers and an indisputable Gen Z celebrity. On TikTok, she often shares her OOTD to her 10 million followers, amassing anywhere from 3 to 10 million views each time.

Together, brands and influencers like Chamberlain have been able to translate into a new era of viral fashion marketing. "Cult Gaia as a whole 'took off' after going viral on Instagram years ago, and since then we've been lucky enough to recreate that moment a number of times with celebrities and our everyday Gaia girls now on TikTok as the frontier of fashion-focused social media," Jasmin Larian, the brand's founder and creative director explains. She says the brand's success on TikTok started with the Serita Dress worn by everyone from Jennifer Lopez to Tracey Ellis Ross, but then really grew when content creators started making digestible, 60-second try-on videos about their other styles as well. There isn't a precise formula or metric for what constitutes a viral fashion video on TikTok, but there are three key types of content that dominate the platform and garner upwards of 5K views per video. For starters, if there are photos of a celebrity or influencer wearing the particular item, many videos use these examples as a sort of a comparative review between a "real" person and a more glitzed-up celebrity look. In a way, the influencers sort of catapult the style, and everyone else can run with it.

The second common theme is an agreed-upon fit for a very specific body type. The Australian brand With Jéan has a viral dress that fits what many people on TikTok refer to as "mid-size" bodies. Most try-on videos highlight how the ruching accentuates the waist and hips without bunching. (We'd probably throw the wildly viral booty leggings into this category, because what they do to butts is the main topic of conversation about them on TikTok.) Last, and maybe the most common, is when users highlight a surprisingly affordable price point for quality or brand, like Christopher John Rogers for Target or Aritzia's vegan leather Melina pants.

In the last year or so, when we were just sitting at home feeling a loneliness that some of us had never experienced, these replicable fashion conversations gave us a way to connect. Style is personal, but it can also be about finding commonality. And brands have taken note of this feedback loop, and they're trying to keep it going. Dr. Dawnn Karen explains many of them are actually looking into how and why we buy things to better tailor their marketing. She wasn't able to get into specifics, but she mentioned that getting to the root of this connectivity is something brands can use when conceiving of new products, or selling us on the ones they already make. Say, for example, a top gets traction among people with larger busts. A brand may realize they have potential with those customers and continue to accommodate them in a more targeted way. TikTok, like any social media, is essentially a free focus group that never stops talking, and savvy brands are paying attention. There is a downside to all this success on TikTok, however. As certain items racked up thousands of videos, the rise of popular knockoffs found on websites like Amazon or Shein followed suit. In the case of Cult Gaia, there is a dress on Amazon that is almost indistinguishable from the Serita when you can't feel the material, and often reviewed by users looking for a more affordable option. "Of course, as things go viral, it's only a matter of time before we encounter tons of dupes for sale on the market. We've experienced this for years and it became especially bad when we launched Serita," Larian explains. Tiktok's viral cycle is new territory in the world of dupes and faster-fashion because it's no longer a guessing game for the Sheins and the Amazons of the world. We know what people want to buy based solely on views, and these brands have the ability to get similar styles into the market within a matter of days. Not only does this hurt the integrity of the originators of the styles, but the cheap materials and labor used to create these dupes are contributing to a cycle of abuse and overconsumption that is rampant in fashion. It's not a hack, it's a practice that exploits everyone involved.

Though fashion-tok feels huge already, it's safe to say it's only getting started. By the end of 2021, analytics firm App Annie predicts that the platform is projected to have 1 billion active users, many of whom are likely to participate in the viral clothing trends we've encountered over the last year and a half. For brands and style lovers, the growth is an opportunity to change what and who gets to be popular in the fashion industry. As we head into the first real Fashion Month since the Coronavirus pandemic, many luxury brands may try to tap into the strategies that have proven successful for Cult Gaia and others. There's also an opportunity for smaller designers to get noticed by the mainstream in ways that an enormous, expensive fashion show honestly can't do. If this year taught us anything, it's that things can change when you least expect it – and in fashion, TikTok might be the catalyst.

Click for more from The New New, our digital cover exploring all the ways to have more fun with clothes this fall.