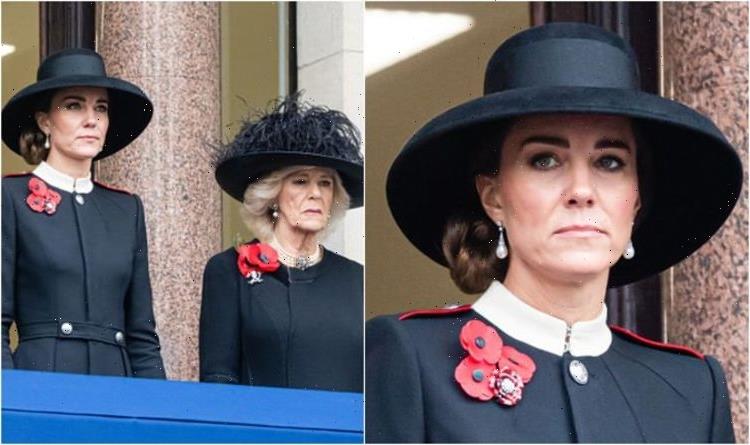 Kate Middleton wore three poppies for Remembrance Sunday and looked effortlessly regal in her military-style outfit. There is said to be a lot of significance behind the Duchess’s choice of three poppies. Poppies are worn as a mark of respect to those who died during the First World War and other conflicts.

This past week, the Royal Family were among the millions of people who wore poppies in the lead-up to Remembrance Day.

However, the Duchess of Cambridge noticeably wore three alongside a crystal brooch.

But what was the significance behind this choice?

The royals wear multiple brooches in honour of family members who have fought and died in wars.

Kate’s great-grandmother had three brothers who were killed in action during the First World War.

The Duchess even viewed letters from her ancestors during a poignant visit to the Imperial War Museum in 2018.

Another reason could simply be because a corsage of poppies is much more visible than one.

The Queen has a famous mantra, according to royal author Karen Dolby: “I have to be seen to be believed”.

Perhaps Kate was channelling this energy as the Queen sadly could not attend the Remembrance Day service.

Kate is not usually the only royal to wear multiple poppies.

Although the Queen was forced to miss this year’s service due to a sprained back, the monarch often displays five poppies.

While Buckingham Palace has never confirmed the reason for the monarch’s preference, it is reported Her Majesty’s five poppies represent each service in the war: the Army, the Navy, the RAF, the Civil Defence, and women.

Kate was seen standing beside the Duchess of Cornwall and Sophie Countess of Wessex, on the balcony overlooking the Cenotaph.

The Duchess opted for a black military-style jacket with red shoulder lapels and a high-neck white collar.

Royal fans will know Kate is a big fan of McQueen, having worn Sarah Burton for McQueen’s designs many times in the past.

The Duchess of Cambridge has previously worn this military-style jacket seen on Remembrance Sunday.

She wore it for the annual Remembrance service in 2018, pairing it with the same poppy brooch and badges she wore at the Cenotaph this year.

The trio of poppy badges were pinned to her left lapel, just above a small poppy-shaped brooch.

Her glossy brunette locks were swept back in a low bun, seen tucked underneath the brim of her hat.

The Duchess’ make-up look was subtle as she opted for simple black mascara, some black eyeliner, and dark pencil over her already-thick brows.