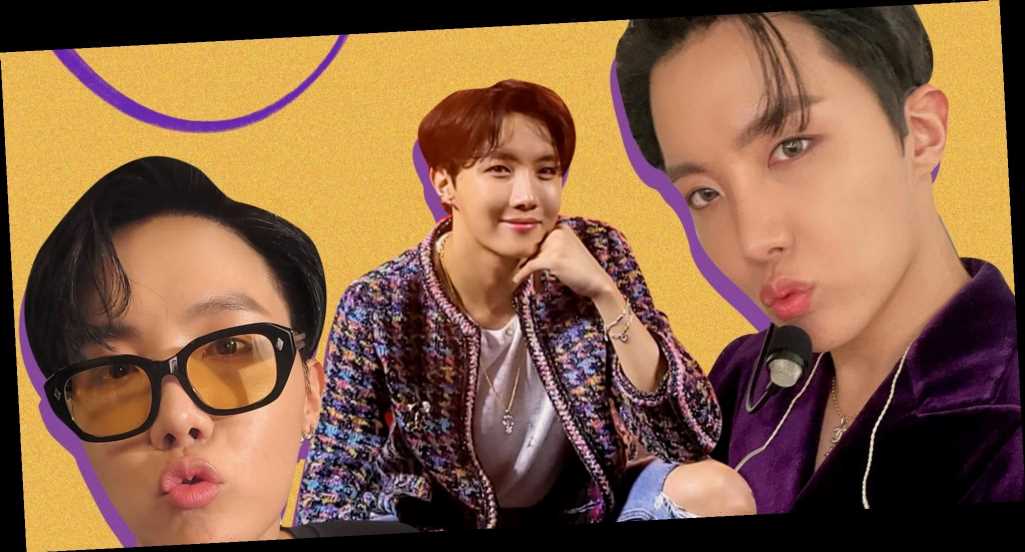 It was on this day in 1994 that the world became (a lot) brighter. Today, we celebrate the sunshine of BTS, the one-man, party-starting pride of Gwangju, your hope, my hope: J-Hope.

We have all sorts of important business to attend to today, in honor of Hobi's  birthday. First: let's acknowledge the endless joy that Jung Hoseok has brought us over the years. His talent is endless and his optimism is contagious — as enveloping as a warm hug at the end of a really bad day. He possesses a smile that could provide Earth with energy for the next 1,000 years. And what better time to gush over my favorite J-Hope outfits (and there are a lot of them, so pace yourself, ARMY) then on his birthday? It's no surprise that the man who named Snoopy as one of his biggest style influences has fun with fashion, landing somewhere at the intersection of "hypebeast" and "cutie pie" aesthetic. Let's raise a can of Sprite in his honor, stream Hope World all damn day, and worship the heart of BTS, our Hobitonin. In all seriousness, can you recall such exquisite use of purple since Prince?

For the 2020 Melon Music Awards, BTS performed "Black Swan," "On," and #1 Billboard hits "Life Goes On" and "Dynamite." The entire performance might have been the best seventeen minutes I've experienced since the pandemic started, and no moment was more gasp-worthy as when J-Hope appeared in a velvet jumpsuit. How widespread was the sartorially-induced meltdown that followed? All three of his names — J-Hope, Hobi, and Hoseok — immediately began trending on Twitter.

Not to mention that J-Hope and/or the genius stylist who was involved in this fit could have easily included a tuxedo shirt, a clavicle-grazing tank, a cool Gucci shirt — anything really. But they did not. Hobi woke up that day and chose chaos in the form of a purple velvet jumpsuit with no shirt. A hill I will gladly die on: The entire "Dynamite" era is actually J-Hope's era. Sure, every member looked amazing, but the visuals Hobi was serving were downright deranged. The undercut and exposed forehead, the '70s-style Gucci suits, pumpkin spice J-Hope as seen on NPR's Tiny Desk Concert — I couldn't sleep for weeks with the never-ending onslaught of serves. Be honest: Did you gasp the first time you saw this picture, fellow ARMY? I did.

For the third season of Bon Voyage in 2018, BTS traveled to Malta where fellow idol Jungkook snapped what might be the most ethereally beautiful picture of J-Hope ever. Seated by the water while a Malta sunset bathes him in golden honey light, J-Hope smolders in a crisp white button-down. This image is burned in my brain as peak "POV: Your rich boyfriend Hoseok takes you out to dinner'' fanfic material.

When the world locked down and BTS had to cancel their 2020 global stadium tour, ARMY feared we might never get to see a performance of J-Hope's MOTS7 solo song "Outro:Ego."Luckily for us, Bangtan never lets down their fans and pivoted to produce a virtual Map of the Soul ON:E concert this past October.

In total, almost a million viewers from 191 countries logged in to swoon over our Hobitonin and a performance as sparkly as his rhinestone encrusted Louis Vuitton denim (accessorized with two of the hottest, of-the-moment brands right now: Gentle Monster sunglasses and DiorxAir Jordan 1 Low sneakers).

How did this J-Hope escape? Shouldn't he be in the Louvre with all the other works of art?

These Map of the Soul: 7 concept pictures are the modern day equivalent of renaissance paintings. They're aching in their perfection — Hoseok's in particular. His glowing skin, his mythically beautiful face, his Dionysus-equse pose — you're telling me this is the same man who will wear a cartoon puppy hat and scream out of pure (somehow adorable) terror on amusement park rides? The duality this man possesses …

For BTS's 2021 Season's Greeting package, J-Hope modeled this FreeVOLT shirt, a hip Korean street style line. As soon as J-Hope's pics hit the internet, the brand announced they would be donating the sales from this particular soon-to-be-sold-out T-shirt to charities that help underprivileged kids from all over the world. Add it to the (extremely long) list of charitable good deeds BTS has inspired.

Please direct your attention away from J-Hope's hot-enough-to-melt-the-ice-caps gaze (I know, it's tough) and to his fit. This is one of my personal favorites because of the cultural juxtaposition: a Korean gat (a traditional hat from the Joseon period) worn with the ultra modern and iconically American Nike Air Jordan 1s. The cross-global combination feels symbolic of J-Hope's worldwide, generation-spanning appeal and influence.

Let’s Get It: “Chicken Noodle Soup”

Want to make any J-Hope bias weak? Four words: Chicken. Noodle. Soup. Hobi. During a BTS break, J-Hope flew to Los Angeles to film an instantly iconic music video for his collaboration with Becky G. The whole project is an amalgamation of everything we love about J-Hope: a high-octane, stays-in-your-head-forever song performed in the bright, sun-soaked locale with all those signature popping, rocking, hopping, tutting, dougie, flexing, swaggin' Gwangju moves. His neon-bright hypebeast fashion in the music video was briefly eclipsed by another "CNS" era fit though …

J-Hope returned to Seoul from L.A. in an airport outfit that caused an international meltdown. The idol, who rarely shows a sliver of skin, wore a barely buttoned star-printed denim jacket from Chemist with no shirt underneath. ARMYs everywhere had no choice but to collapse into the fetal position until they could figure out how to function again. Yes, the outfit is so great — a subtle nod to two '90s fashion icons: the return of the Hawaiian shirt thanks to Baz Luhrmann's Romeo + Juliet and Kurt Cobain's signature retro white sunglasses — but, more importantly, how perfectly "J-Hope'' is this picture? He is sunshine in human form — gleefully out of his chair and dancing to make his members smile (even Suga can't help grin!). Here's the video of the SiriusXM interview, for context. BTS was asked who is "most likely to brighten someone's day" and, well, of course it's you, J-Hope. No. Not Hobi wearing a tuxedo like it's not the hottest thing ever.

I am, admittedly, a sucker for the whole 2019 Jingle Ball performance. It's the white tuxes. How can you resist Bangtan in the dapperest, crispest, most beautiful crystal-snow-white tuxedos? J-Hope in particular looks like a dazzling fairytale prince. Models everywhere should be forever-grateful that Jung Hoseok chose music for a career.