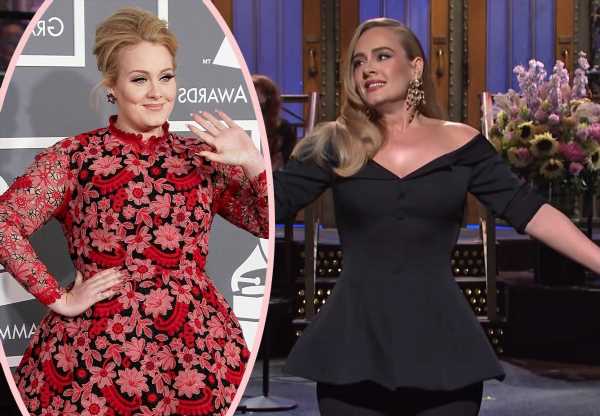 On the eve of her next big release, the highly anticipated 30 album, Adele is breaking out of her usually private shell to give some really raw, honest answers about her personal life.

In wide-ranging new interviews for both British and American Vogue, she opens up about her divorce like never before, something you can read all about HERE. But the profile also gave her the chance to respond to some criticism she’s felt over the past year.

As you probably heard, the Someone Like You songstress went through a remarkable transformation, losing around 100 lbs! Because she went through her fitness journey mostly in private, over about two years, when she finally unveiled her new body, it was a real shock to fans. And it turned out it was too much for some to take. She mused:

“I think one of the reasons people lost the plot was because actually, it was over a two-year period.”

The singer was hit with seriously harsh feedback, from folks saying she was “too skinny” now to critics treating her weight loss as some sort of betrayal, like her change was implying there was something wrong with the way she was.

As far as the negative comments, Adele did see a lot of them — and yes, she found them pretty darn hurtful:

“The most brutal conversations were being had by other women about my body. I was very f**king disappointed with that. That hurt my feelings.”

She sounded a little less patient with British Vogue, saying:

“People have been talking about my body for 12 years. They used to talk about it before I lost weight. But yeah, whatever, I don’t care. You don’t need to be overweight to be body positive, you can be any shape or size.”

As for how the fitness journey got started, Adele explains working out wasn’t about losing weight for her, just about getting healthy — physically and mentally. As she struggled through her “year of anxiety,” as she calls it, exercise was just one of the treatments she found:

“I realized that when I was working out, I didn’t have any anxiety.”

She focused on gaining strength, something she sorely lacked:

She started with core workouts:

“I have a bad back and I had a C-section. So I had just nothing going on down there.”

And it worked! She explained to British Vogue:

“Working out, I would just feel better. It was never about losing weight, it was always about becoming strong and giving myself as much time every day without my phone. I got quite addicted to it. I work out two or three times a day.”

“So I do my weights in the morning, then I normally hike or I box in the afternoon, and then I go and do my cardio at night.”

If you’re balking at that, the fact it’s pretty much impossible for people with jobs, kids, any kind of demanding schedule, Adele completely understands the rarified air she was in as a wealthy woman. She admitted, somewhat embarrassed per the interviewer, that what she did is “not doable for a lot of people”:

“I was basically unemployed when I was doing it. And I do it with trainers.”

She may be embarrassed but she isn’t regretful! She told the outlet the workout addiction was just what she needed:

“I needed to get addicted to something to get my mind right. It could have been knitting, but it wasn’t.”

So was the embarrassment about her privilege why she chose to keep the whole exercise thing private for so long? Not exactly — it just wasn’t done for anyone else’s approval:

“People are shocked because I didn’t share my ‘journey’. They’re used to people documenting everything on Instagram, and most people in my position would get a big deal with a diet brand. I couldn’t give a flying f**k. I did it for myself and not anyone else. So why would I ever share it? I don’t find it fascinating. It’s my body.”

But lots of folks do find it fascinating, obviously. And some even find it profitable.

Adele says all the weight loss regimens you’ve heard about that she does, all the routines and diets, they’re all TOTAL B.S.!

Wow! The interview asked about the story of her doing the Sirtfood diet, to which she snapped:

“No. Ain’t done that. No intermittent fasting. Nothing. If anything I eat more than I used to because I work out so hard.”

She hates one particular weight loss angle the most:

Adele continued her rant against that brand of commentary on her weight loss:

“It’s ridiculous. I think it’s that people love to portray a divorced woman as spinning out of control, like, ‘Oh she must be crackers. She must’ve decided she wants to be a ho.’ Because what is a woman without a husband? It’s bulls**t.”