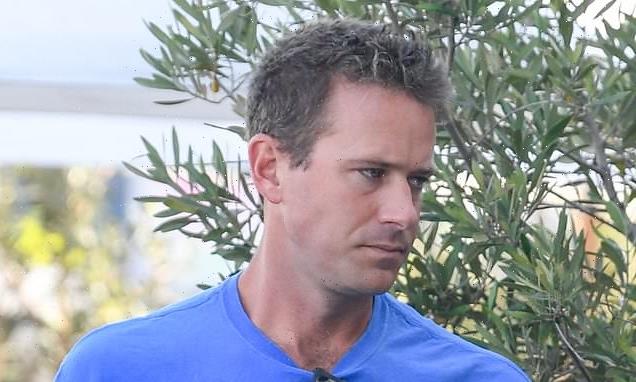 Hammer, 35, spent seven months in rehab for sex and drugs issues and then retreated to the Cayman Islands, where his family are based.

But earlier this month, pictures of the star of Call Me By Your Name and The Social Network selling timeshares and working at a hotel went viral.

Now he’s back in Tinseltown — thanks to the generosity of pal Robert Downey Jr, who is lending him a place to stay in LA, as well as, according to Vanity Fair, having funded his rehab.

And I hear that he is considering a comeback, scandal notwithstanding, ‘when the time is right’. 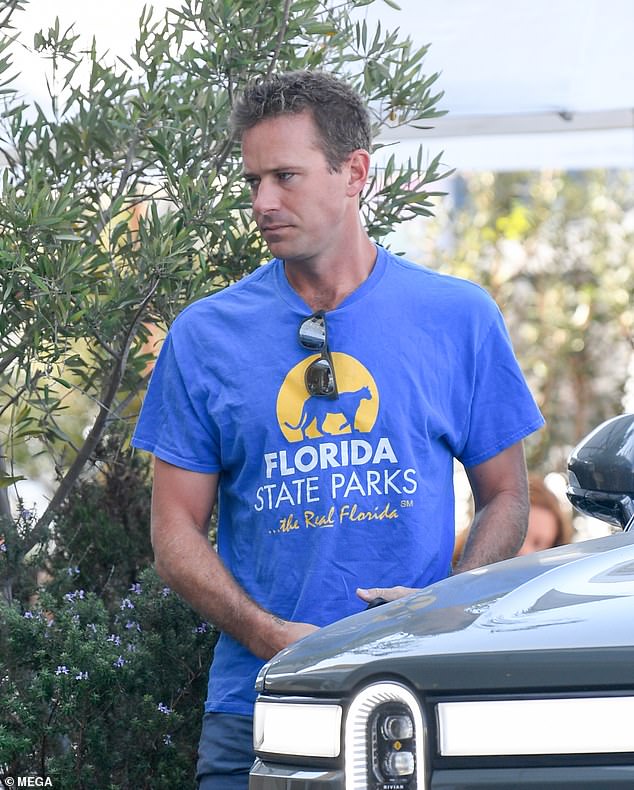 In fact, sources close to Hammer say he never considered giving up his chosen profession. ‘He will come back to acting in due course,’ I am told.

There is talk that film producers are already seeking him for roles in small-budget films. But Hammer’s first move will be to find an agent.

Perhaps he aims to emulate pal Downey Jr, who has become one of Hollywood’s highest-paid actors after a period when he was in and out of jail and rehab.

Hammer’s downfall started after he separated from wife of ten years Elizabeth Chambers, in 2019, after she reportedly found evidence of a dalliance (one version of events suggests he sent her a ‘raunchy’ message intended for someone else).

Then, in January 2020, the Instagram account @houseofeffie started to publish messages alleged to have been sent from Hammer.

One read: ‘I want to eat you . . . I am 100% a cannibal.’ Others talked about eating a woman’s ribs and cutting off her toes. As the scandal grew, the actor’s ex-girlfriend Paige Lorenze claimed he had carved the letter ‘A’ into her skin using a knife.

Then Effie Angelnova held a press conference with lawyer Gloria Allred at which she accused Hammer of rape and physical abuse during a four-year affair.

Hammer called the allegations ‘bulls***’, with his lawyer Andrew Brettler adding: ‘All interactions between Mr Hammer and his former partners were consensual. They were fully discussed, agreed upon in advance with his partners and mutually participatory.’

But Hammer was dropped by his talent agency and publicist; and fired from a number of high-profile films.

The LAPD investigated the rape accusation, but no charges have been brought. This week a representative for the LA District Attorney said that the office had not yet received the findings of the case.

Hammer’s lawyer said there was ‘no update’. He said his client has not been charged with any offences.

His estranged wife Ms Chambers has since said of Hammer: ‘I think he’s happy . . . and that’s good.’ She added: ‘Everybody needs help.’ 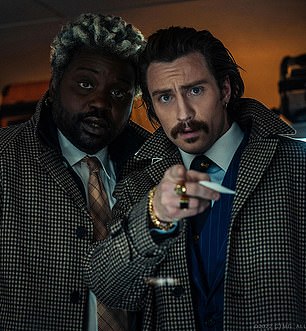 Aaron Taylor-Johnson stars as a Cockney assassin alongside Brad Pitt in action-comedy Bullet Train — and costume designer Sarah Evelyn ‘leaned in’ to every cultural reference for him to look the part.

Telling the full, extraordinary story of the infamous 1960s drugs bust at Rolling Stone Keith Richards’ home — when Marianne Faithfull was said to have been found wearing just a fur rug — has been a preoccupation for actor Nigel Havers for more than a decade.

Havers’ father, Sir Michael, was the most expensive barrister in London at the time and defended Richards and Mick Jagger, who were both convicted and given prison sentences, which were later lifted.

The actor, who recalls getting to know the Stones as a teen, first mooted the project with the BBC in 2004. Now it looks to be finally moving forward. Havers said: ‘We are at the point of casting — and Hugh Bonneville is playing my dad!’

The question of who will play Jagger makes Havers laugh nervously. He quips that Sir Mick is in such great shape, perhaps he can play himself. 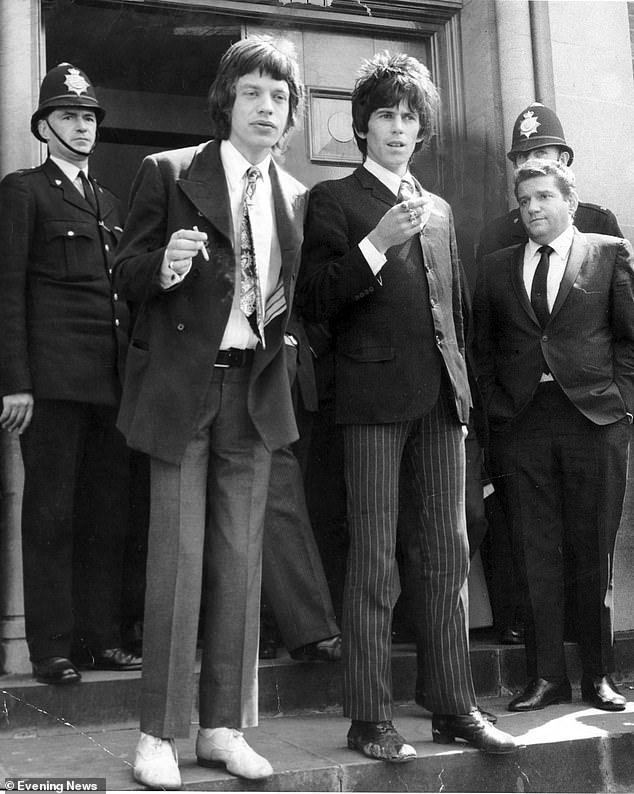 Telling the full, extraordinary story of the infamous 1960s drugs bust at Rolling Stone Keith Richards’ home — when Marianne Faithfull was said to have been found wearing just a fur rug — has been a preoccupation for actor Nigel Havers for more than a decade

But since Jagger celebrated his 79th birthday this week, it is more likely the role will be taken by a rising charismatic young Brit, such as Anson Boon, who played Johnny Rotten in the TV series Pistol and shares a love of snake-hipped fashion with the Stones’ frontman.

The film will be called The Butterfly And The Wheel, after the famous leader column in The Times newspaper which asked (using a line borrowed from poet Alexander Pope): ‘Who breaks a butterfly on a wheel?’

Havers said: ‘The Times, edited by William Rees-Mogg [MP Jacob’s dad] ran a leader column. He was the first to say: ‘Don’t go after Mick and Keith.’

‘It’s a ridiculously good article, which steered the judge.’ Havers added: ‘My father took the case on and became liberal. He never again wore a stiff collar to court. It changed his whole personality, which is amazing.

During the raid on Redlands, Richards’ country estate in Sussex, in 1967, Jagger, Richards and Faithfull were apparently coming down from an acid trip. 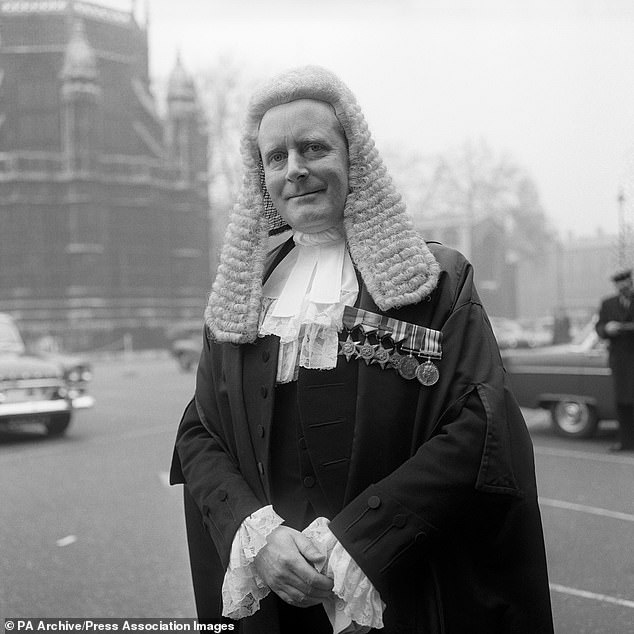 Havers’ father, Sir Michael, was the most expensive barrister in London at the time and defended Richards and Mick Jagger, who were both convicted and given prison sentences, which were later lifted

Police found a handful of amphetamine pills, plus some heroin belonging to a friend, as well as some cannabis. Jagger and Richards pleaded not guilty but were convicted.

Jagger was given a £200 fine and three months imprisonment for possessing four amphetamine tablets. Richards was found guilty of allowing cannabis to be smoked on his property and sentenced to a year in prison and a £500 fine. Both were released on bail after a night behind bars, pending appeal.

Two days later, the op-ed appeared in The Times, with Rees-Mogg asking whether ‘Mr Jagger received a more severe sentence than would have been thought proper for any purely anonymous young man’.

He later said: ‘Nobody else would have been sent to prison for what was essentially a sea-sickness tablet’.’

Not so long ago, Simon Cowell epitomised a rather downmarket kind of flash — driving megabucks cars, holidaying with hot girls in bikinis, hanging out with pop star Sinitta and hypnotist Paul McKenna.

But it seems that the music mogul has entered a new, respectable, ‘country squire’ period — which some of his old pals say is borne out of his ‘desperation’ for a knighthood.

Cowell, 62, was spotted earlier this month at the crashingly middle-class Cornbury Festival in Oxfordshire (where David Cameron gets his groove on).

He’s also been hanging out at nearby Soho Farmhouse. And his fiancee, Lauren Silverman, and their son Eric, eight, are regular guests of Amanda Holden at her house in the Cotwolds. (Holden recently posted footage on TikTok of a Cowell/Holden family handstand challenge at her picturesque country home.)

I’m told: ‘Lauren really wants to be Lady Cowell; and one of the reasons for the wedding is that they both crave respectability.’ Cowell proposed to his long-term girlfriend on Christmas Eve last year, but the wedding won’t happen until at least September, as Cowell’s about to fly to the U.S. to film the new series of America’s Got Talent.

One pal says: ‘Nobody has been invited and quite a few of Simon’s friends are complaining it’s so hard to speak to him these days, which is rather sad.’

On the honours front, Cowell hasn’t even got an MBE, although colleagues such as David Walliams and Ant and Dec have previously been summoned to the Palace.

In 2018, Cowell said: ‘Having seen the others get it, now I’ve started to think that I need at least an O, M or whatever it is.

Gugu Mbatha-Raw is not one to flinch from a challenge. In Surface, a bingeable new offering from Apple TV+, Mbatha-Raw plays Sophie, a woman who has lost the memories of a lifetime after apparently throwing herself from the deck of a ferry. The question is: did she jump, or was she pushed? And who is she, really?

The RADA-trained actress spent hours in a tank of water to shoot the arresting opening sequence for the show — the first three episodes of which will air tonight.

And she reveals that even though she had a stunt double, ‘I did a chunk of it myself, which was really intense’.

Made by Reese Witherspoon’s Hello Sunshine TV company, like her previous mega-hit Big Little Lies, Surface offers a gripping, twisting psychological mystery, told in the context of an oh-so-aspirational lifestyle — this time in San Francisco. 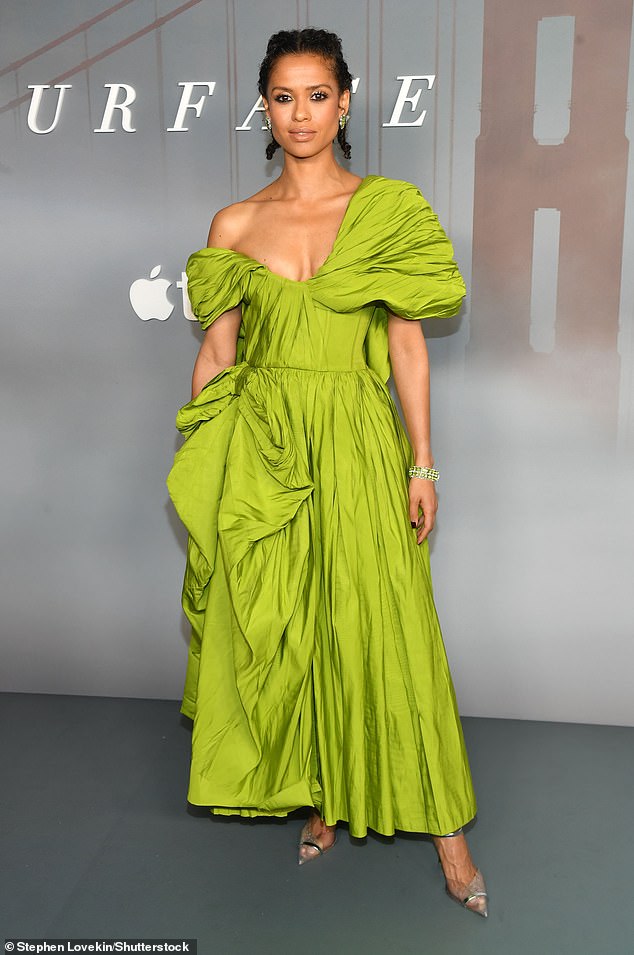 Gugu Mbatha-Raw is not one to flinch from a challenge. In Surface, a bingeable new offering from Apple TV+, Mbatha-Raw plays Sophie

Less desirable, though, were the dousings. ‘Every week, Sophie would get soaked in a very dramatic way,’ Mbatha-Raw said. ‘Like, it would be either the underwater sequence, or a bath scene, or a shower scene, or it was raining or we were on a boat.

‘Water is thematically the element that runs all the way through the show. I’ve never done any underwater acting before and it’s way more challenging than it looks — I think because you’re literally out of your element.

‘All of the usual tools that you use — how you move your face, how you breathe, all the basic things that you hopefully forget about when you’re normally acting — are completely contorted underwater. Your eyes are bulging, you’re focused on staying alive.

‘I worked with a free dive expert, who trained me in breath-holding techniques, but it was definitely one of the more challenging stunt sequences I’ve done.’

In an earlier interview, the Brit said when the going gets tough, she tells herself: ‘Come on, Gugs!’

Mbatha-Raw has recently finished filming Seacole, a drama based on the life of pioneering Jamaican nurse Mary Seacole, who cared for wounded British soldiers during the Crimean War. 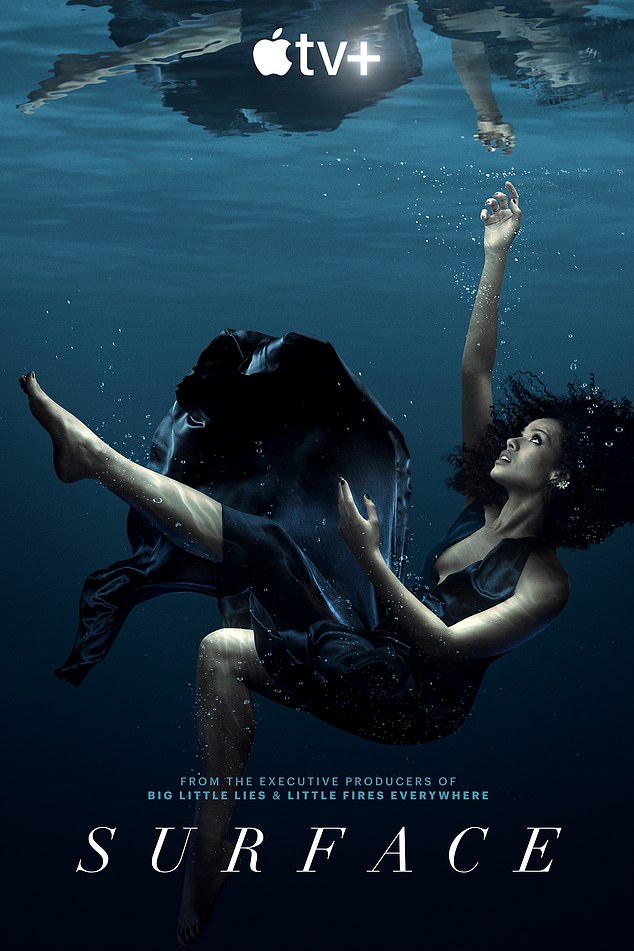 Modine played Private Joker in the 1987 war drama and, in the script, he was meant to be killed off. However, he reveals that Kubrick rewrote the ending after asking his star what he thought about how things panned out.

The actor said he told the legendary director: ‘The real horror of war is having to live the rest of your life with that in your head.’

And so his character’s fate was changed.

The essay appears in A Rabbit’s Foot, a newly launched ‘bookazine’ from film producer and publisher Charles Finch.

Furniture restorer Jay Blades may have replaced 007 in the affections of legendary actress Dame Judi Dench.

Dench, who played MI6 boss M in seven Bond films, developed a soft spot for TV presenter Blades, 52, after they met in March while she was appearing in a one-off Repair Shop sketch for Comic Relief.

The actress (below) says: ‘I collect teddy bears — I have a collection of about 200 — and they had one in the workshop that they had just repaired . . . and I went: ‘Oh that bear!’ And then, we were talking about them.

‘They made a new one for me and it arrived a few weeks later. And he is a proper growler!

‘All my teddies have names and, of course, I’ve named this one. He’s called JB. After Jay Blades. He is really a remarkable man.’

Comedians Dawn French and Jennifer Saunders appeared in the sketch, too, and the pair didn’t fail to spot Dench’s admiration. French recalls that Judi said: ‘Oh, he stole my beating heart!’ 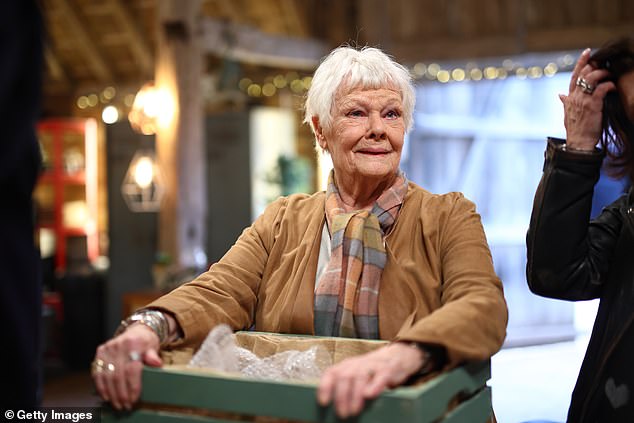