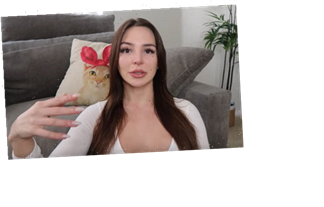 It is truly, thoroughly over between Anfisa Arkhipchenko and Jorge Nava.

But even though her marriage and 90 Day Fiance seasons are behind her, they are how Anfisa rose to fame.

As such, she worries that a lot of fans have misconceptions about her.

Some are due to her sense of humor, other to Jorge’s actions, but others, she says, were from meddling producers.

Just as a number of other 90 Day Fiance stars have done, Anfisa Nava spoke out on her YouTube channel.

She played short clips from multiple episodes from her time on reality TV.

It’s not that she hasn’t moved on — she wanted to point out exactly where editing and a lack of context gave people the wrong idea.

First up, Anfisa shared that, by her own admission, some of these moments were all on her.

She explained that she has a “weird sense of humor” featuring “deadpan jokes” that play up to the “Russian stereotype.”

Just as Yara Zaya resents stereotypes about Ukraine, Anfisa would give deadpan deliveries seeming to confirm that everyone’s suspicions were true.

So that meant making ludicrously high demands of money at times.

Anfisa explained that all that the show had to do was rob those moments of a little context.

Suddenly, Anfisa seems to be sincerely demanding $10,000 a month, or the most expensive dress in the store.

Speaking of the dress, Anfisa shares that the exchange only looked like that because “that’s what the producers wanted.”

It’s not that they staged or “scripted” (I hate that word in this context — 90 Day Fiance is many things, but “scripted” it is not) that moment.

Instead, Anfisa relates to her viewers, they simply edited out a chunk of conversation and made it appear that Anfisa was 100% serious.

There was also a moment on the show when many viewers soured on Anfisa.

In the scene, Anfisa kept calling Jorge nonstop, and he complained that he could miss out on many thousands of dollars if he missed a client’s call.

But Anfisa now explained that she was trying to keep Jorge from doing something illegal — implying that he was making an interstate marijuana deal at the time.

The infamous moment when she screamed at Jorge over the phone for leaving her, she explained, was because she was panicking.

At the time, she had no license or local friends and Jorge lied to her — and a simple walk to the garage turned into a lengthy, unexplained absence.

Even so, she acknowledged that she shouldn’t have “screamed so much.”

Other moments, however, like the scene where Anfisa claimed that money was most important to her, were on her.

Anfisa explained that it was “a joke” and “sarcastic.”

In general, reality TV is not the best venue for deadpan jokes. If the viewers are just getting to know you, it’s easy to make you seem serious.

Anfisa revealed that “things were not going very well” even before Jorge went to prison in 2018, despite attempts to make their marriage work.

But she emphasized that Jorge’s “crime” (transporting marijuana in Arizona, where it was strictly regulated) was not for her benefit.

Whichever fans claimed that he was desperate to earn money to give her the life she wanted were just telling themselves stories, Anfisa suggested.