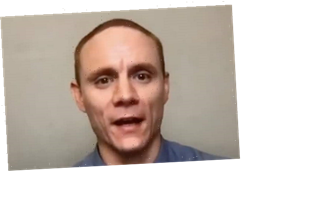 Matt Johnson says he doesn’t have “too guilty of a conscience for pulling one over on Maria Bartiromo’s show” after the animal rights activist appeared Wednesday on Fox Business Network pretending to be the CEO of a food processing company.

Johnson told TheWrap exclusively Wednesday that he and his group, Direct Action Everywhere, “put feelers out there elsewhere, strategically” when trying to land a television interview, but were rejected by “several” shows. Though they’d considered doing a phony interview for over a year, the plan kicked into high gear this week, he said, when they assumed most show staffers and bookers would be off for the holidays and, he hoped, replaced by “people filling in who might not be as diligent.”

Normally, Johnson handles press for Direct Action Everywhere, where he’s worked for five years. Wednesday, he reversed his role somewhat and took an interview about his own very public action.

While he wouldn’t reveal all the “trade secrets” of how he and his team got the Fox Business Network bookers to believe they really represented Smithfield Foods and its new CEO, Dennis Organ, he said the ruse “involved fake email addresses and fake phone numbers and lots of pitches.”

He told TheWrap the group found “Mornings With Maria” wasn’t “as rigorous” in vetting as the shows that had rejected them and he didn’t feel guilty for the ploy because he thinks the show features a lot of “misinformation” already. He pointed to the recent fact-check Bartiromo’s “Sunday Morning Futures” aired on the lack of evidence that there was fraud associated with Smartmatic and Dominion voting machines in the 2020 election. That fact-check rolled Sunday after a legal threat from Smartmatic last week.

Johnson noted he’s already facing a felony charge for an earlier investigation into the mass killing of animals at a major pork supplier, but said he took the “calculated risk” of appearing on Fox Business Wednesday after consulting with the “great folks” on his legal team.

Bartiromo said at the end of her show Wednesday that she and her team — and by extension, her audience — had been “punked” by Johnson, who used his six minutes on air to suggest meat production could lead to another pandemic. The longtime journalist vowed to be more “vigilant” in the future, even after she rolled her eyes during the interview with the faux CEO itself.

Check out the segment above.