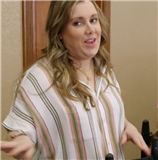 The Duggar family has been more secretive than ever lately.

Jim Bob’s crew always kept some of their more bizarre beliefs on the down-low, but there was a time when news of courtships, weddings, and pregnancies was eagerly shared with the entire world.

These days, however, the Counting On clan is being much more selective with regard to what information they choose to share with the public.

Earlier this month, Jed Duggar married Katey Nakatsu and news of the ceremony was kept under wraps until after the couple said “I do.”

Now, it appears that Jana Duggar is being courted by Stephen Wissmann, but again, the situation is shrouded in secrecy.

Now, the folks who watch the Duggar clan most closely have concluded that Anna is pregnant with her seventh child.

They’re also of the belief that she’s quite far along.

Normally, it would be easy to dismiss such a rumor.

The Duggars are of the belief that procreation is a woman’s sole reason for being, and in the past, they’ve shouted any and all pregnancy news from the nearest rooftop.

But these days, they’re keeping family news within the family.

So it’s possible that Anna’s sudden disappearance from social media is part of her effort to hide a baby bump.

Anna is still posting, of course, but these days she doesn’t appear in any of her Instagram pics — which is sort of odd.

The latest example of this phenomenon appeared on Anna’s page earlier this week.

She posted the above pic of four of her kids with a caption explaining their surroundings:

Josh and Anna live in a windowless shack on Jim Bob’s property, so any invitation to step out of their hovel and engage in a wholesome family activity is surely welcome.

And in case you were wondering what sort of content is considered suitable for Duggar family movie night — well, as you probably expected, they kept it wholesome.

“Dick Van Dyke show,” Anna said in response to a fan’s question about what they were watching.

Hey, there was a time when Jim Bob didn’t allow secular entertainment of any kind, so we suppose this is a step in a more modern direction.

Anyway, what commenters really fixated on here is Anna’s absence from the photo.

This is part of a larger trend, and fans claim that when Anna does show up in a group shot, the pics are cropped so that she’s only seen from the shoulders up.

“Every pic doesn’t show her bottom half. Def prego,” one fan recently commented on a set of pics from Anna’s sister’s baby shower.

“Anna is definitely pregnant, she’s wearing black and her face is puffy,” another commenter observed.

Normally, we’d assume that if Anna is pregnant she’d be making an announcement sometime soon.

But given the Duggars’ new “need to know” policy, we might not know anything for sure until she announces the arrival of her seventh child!