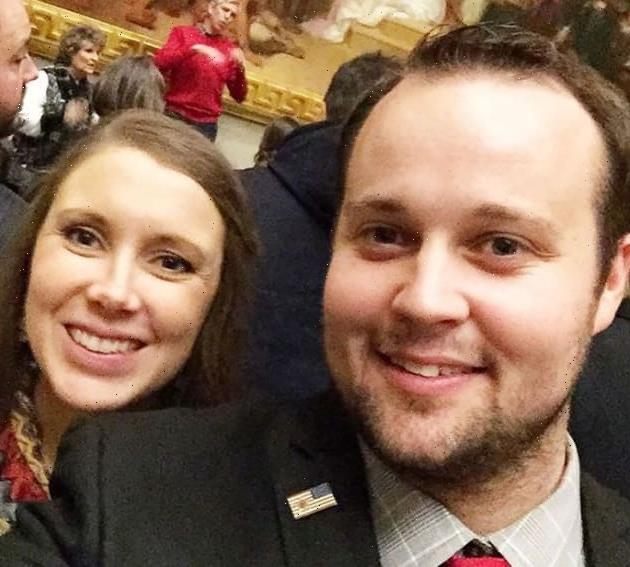 On Tuesday, the very pregnant mother of six was spotted for the first time since her seemingly evil husband, Josh Duggar, was arrested in late April on two counts of child pornography charges.

She wasn’t merely seen outside a courthouse with Josh, either.

Anna was seen outside a courthouse with Josh — and definitely had a smile on her face.

Given the circumstances (Josh having just left a hearing, during which a judge denied his request to dismiss the case… the former reality star staring at a potential 40 years in prison… allegations that he ogled footage of an 18-month old gettiing raped), why on Earth was Anna smirking?

“Anna is convinced Josh will be a free man soon and be able to raise their kids,” an insider tells The Sun, adding:

“She should be worried she’s going to be alone with seven children, but she isn’t.”

This isn’t the first time we’ve heard such chatter.

By nearly every account we’ve come across, Anna has done anything but shun Josh amid his mounting legal woes.

Ever since Josh’s May 6 hearing, for example, which took place a week after his arrest, Duggar has been forced to reside with court-appointed guardians.

He isn’t permitted to be near his own children without adult supervision because all six sons and daughters are under the age of 12 — and Duggar is accused of downloading sexually graphic material involving an endless array of minors.

Sources have said she spends most nights in bed with Josh at this alternative house, allegedly abandoning her kids in the process.

“She doesn’t seem to care what anyone says, or if people think she’s crazy, Anna is standing by Josh,” adds this same new report in The Sun.

“The family [is] so religious they are told it’s a sin to lie, so Anna believes everything Josh says.

“The longer it drags on the more convinced she is this will all blow over.”

That’s quite the statement, isn’t it?

According to this publication, Anna doesn’t think it’s possible that Josh would lie to her because lying would be a sin and she was raised in a household that frowns very strongly on committing a sin.

Josh has already confessed to cheating on Anna with random women he met online, along with molesting his own sisters back when he was a teenager.

We’re pretty sure those acts would also be considered sins.

Josh is currently on home confinement until his trial in November, living with third party custodians LaCount and Maria Reber, who are longtime friends of the Duggar family.

“Anna has been spending all of her time at the home,” the source claims. “I heard tensions have been high for quite some time.”

It’s almost easy to forget this point that Anna is expecting the couple’s seventh child in just a few weeks, too.

What a total, complete and tragic mess, you know?

“She is desperate to have him by her side for the birth, but we don’t know if he’ll be allowed in the hospital yet,” The Sun explains, reminding readers that Josh must wear a GPS ankle monitor these days and is only permitted to go to certain destinations.

“Everyone outside of the family thinks Anna should be focusing less on Josh and more on getting settled with her children away from the drama and preparing for her new arrival.

“But the reality is the opposite.”

Josh has pleaded not guilty to the counts against him.

His trial is scheduled to begin on November 30… despite his legal team’s efforts in court this week.

Just about two months before he goes in front of a jury of his peers, a judge tossed out all of Duggar’s pleas to get the charges dismissed.