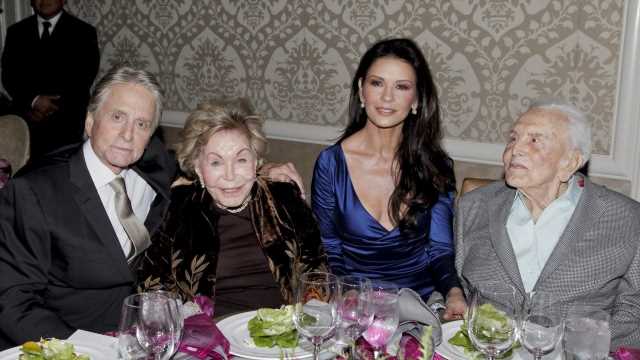 Rest in peace, Anne Douglas. The widow of Kirk Douglas and stepmother of Michael Douglas has died at 102, ET confirms.

Anne died peacefully at home in Beverly Hills on Thursday. Her death comes just over a year after Kirk died in February 2020. He was 103.

“My father could never keep a secret. Anne was just the opposite,” Michael said in a statement. “That’s why when I read their co-authored book, Kirk and Anne, in which she talked about her early life in Germany; her war years in occupied Paris; her career before she met my father. She also included their private correspondence, which gave me new insights into their courtship and marriage.”

“Anne was more than a stepmother, and never ‘wicked.’ She brought out the best in all of us, especially our father,” he continued. “Dad would never have had the career he did without Anne’s support and partnership. Catherine and I and the children adored her; she will always be in our hearts.”

Born Hannelore Marx in Hannover, Germany, Anne spent her young adulthood trying survive in Nazi-occupied France. She started working in film publicity, and first met Kirk in 1953 when he offered her a job as his publicist while in Paris to film Act of Love.

Their working arrangement turned into love, and their romance continued across Europe. Anne and Kirk kept in touch as he filmed 20,000 Leagues Under the Sea in the Caribbean, and he then urged her to come to Beverly Hills after she finished her work with the Cannes Film Festival in 1954. He proposed six weeks after she arrived in Los Angeles.

Anne leaves behind an impressive philanthropic legacy. To date, the Douglas Foundation has contributed more than $118 million to worthy causes. In 2012, The Foundation announced additional gifts of $50 million to five nonprofits, including the Kirk Douglas Theater, the Anne Douglas Center, the Motion Picture and Television Home’s Alzheimers and dementia unit, Sinai Temple’s Kirk and Anne Douglas Childhood Center, and St. Lawrence University’s Kirk Douglas full scholarships for minority students. It will continue its good works under Anne’s appointed administrators.

Donations in Anne’s memory may be made to the Anne Douglas Center at the Los Angeles Mission.