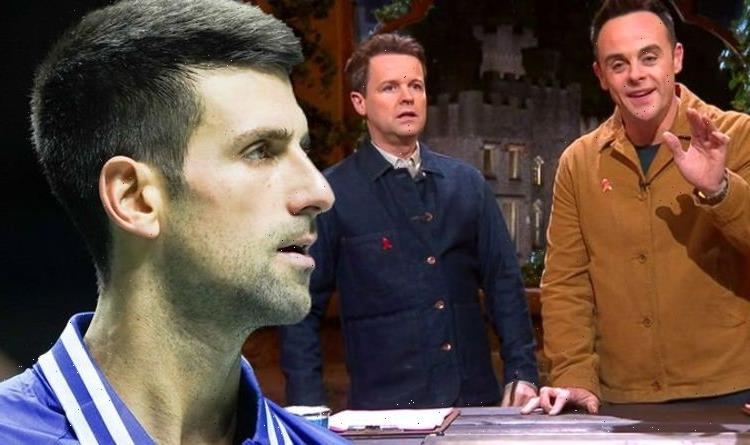 I’m A Celebrity… Get Me Out Of Here! hosts Ant McPartlin and Declan Donnelly, both 46, poked fun at tennis player Novak Djokovic today as they discussed their show’s possible return to the jungle. Their comments come as Djokovic, 34, awaits a decision on his deportation from Australia.

In conversation with BBC Radio 1 Breakfast presenter Scott Mills, presenters Ant and Dec discussed their most recent series of I’m A Celebrity.

Scott, 47, began by complimenting the series, applauding the duo for continuing on in spite of the issues caused by Storm Arwen and the looming presence of COVID-19.

Usually, the show takes place in the heart of the Australian jungle, but, for the past two years, the series has been filmed in Gwrych Castle in North Wales due to the pandemic.

Dec explained: “It was so difficult to do the show this year with the storm and just with the continual drama of Covid.

“It was just so difficult to get the show on air, so we’re just thrilled that we got it on air and it was good – we really enjoyed it.”

Despite his positive outlook on the UK-based version of the series, Dec admitted that his team have been missing the jungle.

“The people of Wales made us feel very welcome again, but we are ready to go back to Australia, I think,” he confessed. “I think it’ll be nice to get them back in the jungle.”

Ant agreed: “Yeah, it’s the show’s home, it’s where it should be, you know? You want to watch I’m A Celebrity and you want to see it in the sunshine.

“Everybody involved with the show is trying their best to get it back there next year.”

At this point, Dec made reference to Djokovic, who is currently in immigration detention in Melbourne with a court challenge due on Monday.

“We’ll try our best to get in there. Novak Djokovic isn’t making a very good job of it at the minute, so we don’t know if we’re going to be able to get in!” Dec joked.

Djokovic landed this week to play in the Australian Open, but the world was stunned when the tennis legend was denied entry due to his unvaccinated status.

The player had previously been given an exemption to Australia’s vaccination rules, which had also been met with some controversy.

Djokovic has openly admitted that he is opposed to vaccination, and plenty of Australians were angered when the tennis star was granted an exemption to play in the tournament on unspecified medical grounds.

The exemption was granted by two independent medical panels organised by Tennis Australia, the body that runs the event, and Victoria state.

However, on Wednesday, Australian Border Force officials stated that the sports star had “failed to provide appropriate evidence” at Melbourne Airport.

The future remains uncertain for Djokovic, who still hopes to play in the Australian Open, which is due to start on January 17.

The tennis pro had his sights set on winning the tournament for the tenth time, which would make him the men’s most successful player with 21 Grand Slams.

The BBC Radio One Breakfast Show airs weekdays at 7am.