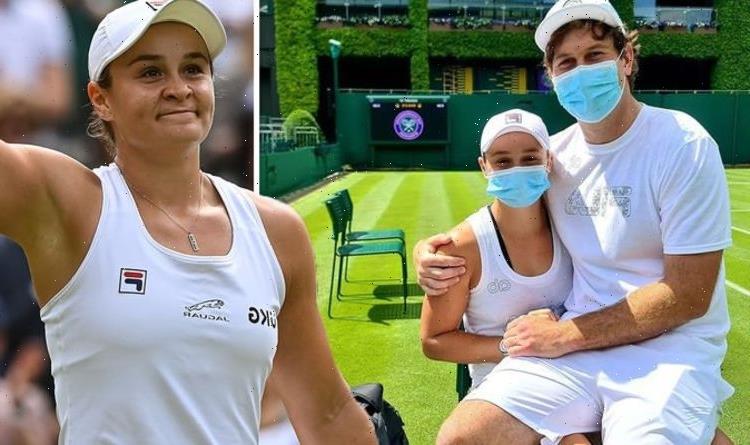 Ashleigh Barty’s professional golfer partner Garry Kissick, has taken to Instagram to support his partner ahead of the Wimbledon final. The golf pro posted a sweet snap of him and his Australian tennis player partner at Wimbledon, ahead of her match against Czech player Karolina Pliskova.

In view of his 3,000 Instagram followers, the golfing professional posted a cute picture of him and Ashleigh at the SW19 championships.

Sitting on his girlfriend’s lap, both Ashleigh and Garry wore face masks and matching white outfits as they relaxed at the side of a grass court.

The sportsman captioned the post: “Hey #wimbledon #tyzzphotography,” alongside a heart emoji.

The golfer is now a permanent fixture in his girlfriend’s support team as she takes part in competitions around the world.

Fans of the tennis player took to the comments to wish her good luck in the final.

One wrote: “Garry, you really must be Ash’s lucky charm!!”

Another penned: “Let’s go for the Trophy!!!”

However, this isn’t the first time that the 25-year-old Australian has found herself in the Wimbledon finals.

In 2011, at the age of 15 Ashleigh won the junior title at the London championships.

But two years later she decided that she had enough of living the life of a tennis player and returned back to her native Australia where she took up cricket.

However, in 2016 Ashleigh returned to the tennis circuit.

Three years later, she had won the French Open and gained the title of women’s world number one player.

Now the world’s number one player, Ashleigh has a reported net worth of around $25 million and has been sponsored by the likes of Jaguar and Vegemite.

Following her semi-final win, Ashleigh looked back at her history of playing at Wimbledon.

Speaking at a press conference, she said: “I think 10 years ago I came here for the first time as a junior and learned a lot in that week.

“Probably 2018, 2019 were some of my toughest weeks playing. To come away with our losses in those two tournaments, I learned a hell of a lot from those two times,” she continued.

Ashleigh went on: “I think a lot of the time your greatest growth comes from your darkest times.

“I think that’s why this tournament has been so important to me. I’ve learned so much with all my experiences, the good, bad, everything in between I’ve been able to learn from.”