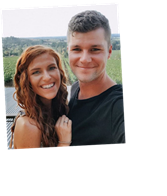 Audrey Roloff and Jeremy Roloff are hated on by pretty much everyone at the moment.

The former recently tried to profit off the ongoing, deadly wildfiires in Oregon… while the latter continues to spread dangerous conspiracy theories about this natural disaster.

But it’s more certain than ever before that the spouses are still very much in love with each other.

The couple celebrated its sixth wedding anniversary this week, with Audrey detailing nearly every aspect of their time together.

“We like to celebrate our anniversary like it’s a national holiday because to us it’s super important,” Audrey wrote to open her caption to the photos above and below.

“In my opinion… the celebration of your marriage once a year should merit more planning, rearranging work schedules, building suspense, creativity, and tradition than most of the American holidays.”

Audrey and Jeremy, of course, claim to know everything about marriage.

They literally wrote a book about their relationship, offering advice throughout the memoir and angering some critics, many of whom view Jeremy and Audrey as being wildly presumptuous and narcissistic.

It’s great their relationship is working out and everything, these haters argue.

But what makes them think they know what’s best for everyone else out there?

Anyone who thinks this should probably stop reading right now. Because it’s about to get very mushy…

“Every other year Jeremy and I trade off who plans our anniversary – we both like surprises,” Audrey explained.

“This year was my year. In the morning we watched “the wedding movie” – aka our wedding video – with Ember,⁣ and her commentary was hilarious…

“Then we dropped the kids off at Gigi and Papa’s (thanks mom and dad) and since I wasn’t pregnant or with a newborn this year. I was set on riding our e-bikes through wine country!

“We explored back country roads, laughed, drank the best pinos, “locked it in” (if you know you know) and enjoyed a night away just the two of us at one of our new fav spots.”

Did the husband and wife get it on?

“We spent some time reflecting and reminiscing about our 6th year of marriage, scrolling through old photos, sharing our favorite memories, and then dreaming and setting intention for year 7!” wrote Audrey.

What else did they do on their special night?

“And of course, we read our anniversary letters – our favorite tradition,” Audrey said.

“On our honeymoon we wrote letters to each other to be read on our first anniversary. We loved reading those letters so much that we decided to make it a tradition! Plus we have a thing for letters.

“Every year on our anniversary we read our letters from last year, and write letters to each other to be read the following year.

“We ran out of time on our babysitters this year so we plan to finish writing our anniversary letters to each other tonight.”

Audrey and Jeremy are parents to a daughter named Ember and a son named Bode.

They got married in 2014 and left Little People, Big World just over two years ago.

These days, the pair make a living as authors, podcast hosts and Instagram influencers.

If it’s half as good as the half we’ve known, Here’s Hail! To the rest of the road.

For his part, Jeremy didn’t write as much as his wife.

But he did use the same quote as the one she cited above, and added:

We’re headed into our 7th year married, and we couldn’t be more excited for what’s ahead! I love this women so much, she refines me and inspires me like I’ve never known.

It was her year to plan how we’d celebrate.

We went wine tasting, scouted listings, cruised the countryside on our E-bikes, and spent the night at the Allison inn in Newberg. Was a great time being friends – just the two of us.

I choose you @audreyroloff.

Audrey Roloff: Inside Her History of Ugly Family Feuds!Start Gallery