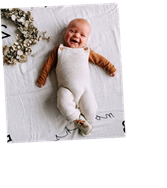 Audrey Roloff is not in a great place physically these days.

As previusly documented, the Little People, Big World alum has been suffering a bit since giving birth to her second child in January.

At one point, Audrey confessed that she’s been hurting really bad due to a breast ailment and also a hip ailment.

But Audrey also wants to be extremely clear:

Yes, she’s in pain. But, hey, you better believe she’s also ecstatic and happy and so very grateful.

We know this because Roloff has made note of it before, but now we also know it because Audrey has shared new photos of her son, Bode, and also provided fans with a fresh update on the precious baby.

“Two months with my little dude and he just gets sweeter every day,” wrote Audrey as a caption to the snapshots above and below.

She and husband Jeremy are also parents to a two-and-a-half-year-old girl named Ember.

“He is such a smiley little baby, always bursting into the biggest gummiest grin when we talk to him,” continued Audrey in her post, concluding as follows:

He’s still sleeping like his daddy just started “cooing” back at us, and he’s already busting through his 3m clothes. He is my little snuggler and I’m soaking up ever second.

She’s also been quite honest about what happens to a woman’s body after child birth, talking a few weeks ago about the discomfort of “reoccurring mastitis” and adding:

“I have what my doctor and chiropractor are calling … essentially separation of your pelvis, [pubic symphysis], which is a normal thing to an extent in labor and pregnancy.

Despite these unfortunate health concerns, Audrey loves being a parent and is undeterred about having more children.

Maybe not right away, of course.

“We have always wanted to have more,” the she told Us Weekly on Monday, February 24, adding of herself and Jeremy:

“We don’t put a number on it. We always say we’ll take them one at a time. You never know what you’re going to get, but Lord willing, we’d love to have more.”

Audrey is just settling in as a mother of two, so she’s not about to put a timeframe on when she and Jeremy may try again.

“Jeremy’s one of four, so he’d at least like to get there, so we’ll see,” Audrey said in this this same tabloid interview, referencing Jeremy and his siblings: Molly, Zach and Jacob.