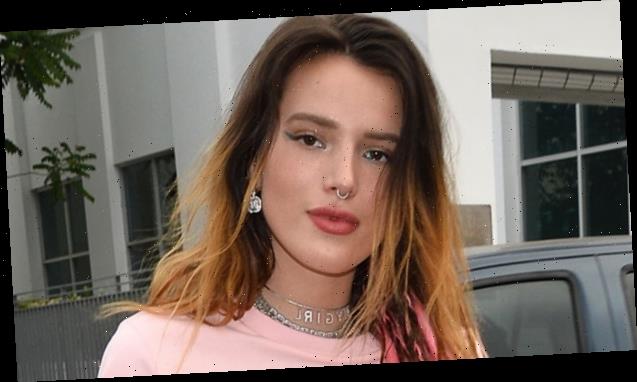 Bella Thorne shared some eye-catching new photos of herself showing off a blonde wig and flaunting her figure in a black lingerie set while asking her fans if they want to ‘spend Valentine’s Day’ with her.

Bella Thorne, 23, gave her Instagram followers a gorgeous sight to see on Feb. 12 when she shared a series of photos from a photoshoot that had her rocking a black bra and matching panties. The actress also wore white gloves, a set of necklaces, and donned a blonde up-do wig that had a pearl-like headband and some strands hanging down while framing her face. She topped the look off with on-point makeup that included black eyeliner and a dark pink lipstick.

“I’m free for Valentine’s Day spend the weekend w me ? Link in my bio 😍 @contentxstudios should I go blonde!?” she wrote in the caption, referring to her OnlyFans account.

Just five days before her latest post, Bella shared other pics from that same photoshoot with a similar caption that asked her fans if she should go blonde. Both posts were met with a lot of positive responses. “Fave pics of you ever,” one fan wrote while another called her a “goddess.”

This isn’t the first time Bella has wowed in flattering lingerie. The beauty rocked pink lingerie in photos she shared on Instagram in Dec. The look happened to be from the music video for her single “Stupid F–king B–ch”, a song about a clout-chasing friend who tries to steal her famous friend’s spotlight, and she looked flawless!

Bella’s no stranger to taking photos in random places either. She shocked fans when she posed in lingerie while out on a porch in the snow. She also had on a long white coat, heels, and necklaces and appeared very comfortable despite being outside. The pics received just as many positive comments as her latest post did.

When Bella isn’t strutting her stuff in lingerie, she’s posting about her natural body with fans. She proudly showed off her “back acne” in other photos from Dec. and added a caption that proved she doesn’t care what others think about her. “Screen shots from this iPhone video😍 should I post the video ??? Yes I have back acne don’t @ me If I post it it’s going up on my OF 🤔 I dropped my OF to only 10 dollars crazy 🥺,” she wrote, referring to her Only Fans account.