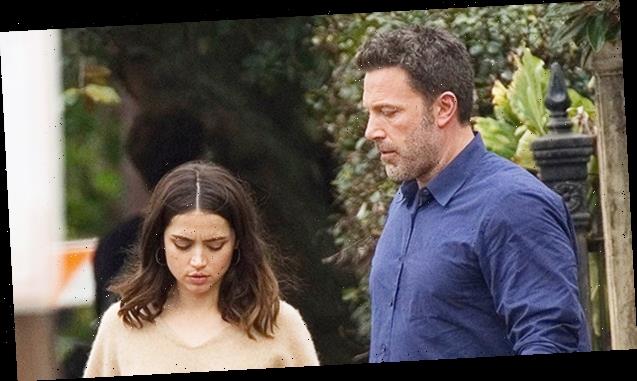 Ben Affleck has been enjoying a trip with Spanish actres Ana de Armas in her hometown of Havana, Cuba! The actors just wrapped a movie together.

Ben Affleck, 47, has taken a trip all the way to Ana de Armas‘ hometown of Havana, Cuba! The purpose of this getaway remains unclear, although Ben sure does look like he’s enjoying himself by the side of the 31-year-old Spanish actress, whom he recently filmed the psychological thriller Deep Water with. The duo was seen happily shopping at a retail store called Clandestina, which shared multiple photos of the actors to its Instagram Story on March 6. In one of these pictures, Ben looks at Ana as she looks darling in a white eyelet summer dress and sun hat. You can see that photo, here.

The co-stars also took a trip to a Havana restaurant called La Corte del Principe, where they snapped a photo with one of the employees. The trip has turned into one long meet and greet in Cuba, with Ben and Ana posing for even more photos with other fans. You can check out those pictures, here!

Shooting for Deep Water just finished, and Ben and Ana were seen filming Adrian Lynes‘ movie in New Orleans. The co-stars were even photographed walking down a sidewalk in the state on Feb. 16, and Ben had a wedding ring on his finger — you can check out that photo below! In the movie, he plays the husband of Ana’s character, who begins having affairs to thwart a divorce. One fan even claimed to spot Ben practicing his Spanish with Ana off the set! “Ben Affleck right behind me spitting game to Ana de Armas in Spanish all night long is a vibe 😂,” the Twitter user posted on Jan. 18.

Ben did voice his intentions to learn more Spanish — specifically, so that his daughter Violet, 14, won’t surpass his bilingual skills! “She’s always been a very good student, and she’s been interested in Spanish, and so I would often help her. Now, all of a sudden, she’s gotten into the grade where she’s, like, in the harder Spanish classes and she’s getting better,” Ben revealed on the March 4 episode of The Kelly Clarkson Show. He then joked, “I was like, ‘Nope. This is not happening.’ I don’t mind that I can’t do your math homework when you’re 14 years old, but you are not going to be better at Spanish than me. So I’ve decided now I gotta take classes; I gotta do something to keep up.”

Twitter is now collectively freaking out over the possibility of Ben and Ana dating one another. Considering that Ana just starred in the Oscar-nominated movie Knives Out and plays the newest “Bond Girl” in No Time to Die, she’s a rising force in the film industry! Put Ben into the equation and, well, Twitter isn’t ready to handle this powerful duo. “Film twitter is gonna cry so hard over Ben Affleck and Ana de Armas dating,” one fan tweeted.