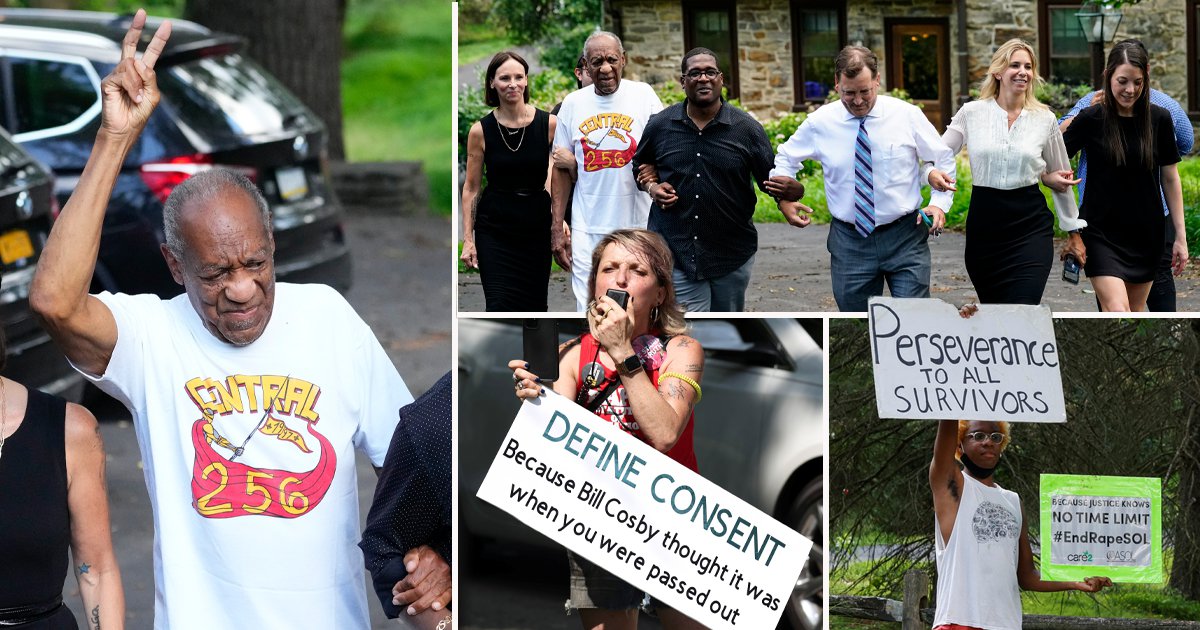 Bill Cosby has been photographed returning home after being released from prison in Pennsylvania after his sexual assault conviction was overturned.

The actor, 83, was released from prison on Wednesday after the Pennsylvania State Supreme Court overturned his 2018 conviction for sexual assault.

Cosby, who has always refused to acknowledge wrongdoing for all accusations, was photographed being driven away from the prison as he waved out of the window of the car, before hugging friends as he arrived back to his house.

The Cosby Show star was also seen flashing a peace sign at waiting photographers despite protesters with placards denouncing his release waiting along the route for his car to pass by.

He had been sentenced to up to 10 years in prison in 2018 after being found guilty on three counts of aggravated indecent assault.

Pennsylvania’s Supreme Court has now ruled that a non-prosecution deal his lawyers had struck with a previous district attorney in 2005 should have shielded him from charges.

‘Cosby’s convictions and judgment of sentence are vacated, and he is discharged,’ the justices wrote in their opinion.

It was stated in court that district attorney Kevin Steele, who made the decision to arrest Cosby, was obligated to stand by his predecessor’s promise not to charge the actor after he gave potentially incriminating testimony in a civil suit brought by Andrea Constand.

Justice David Wecht said Cosby had relied on the former prosecutor’s promise and that overturning the conviction, and barring any further prosecution ‘is the only remedy that comports with society’s reasonable expectations of its elected prosecutors and our criminal justice system.’

Cosby had been in prison in Philadelphia for two years after being convicted of drugging and sexually assaulting a woman at his home in 2004 but had been resisting sex offender programs.

He had refused to take part in the programmes or acknowledge wrongdoing, even if it meant that he would have to serve his full sentence.

Cosby had been accused of sexual misconduct by dozens of women, with allegations spanning from 1965 to 2008 which he has denied, but Constand’s allegations were the only ones that resulted in criminal charges.