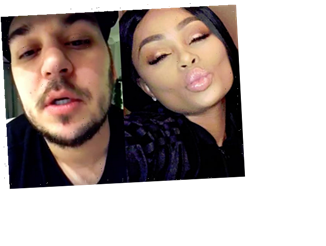 Last month, Rob Kardashian lost his emergency bid for sole custody of Dream despite accusing Blac Chyna of being an unfit mother.

She’s firing back, claiming that Rob’s alleged mental health issues are holding him back from being there for Dream.

Us Weekly reports that Blac Chyna is accusing Rob Kardashian of hiding both himself and his mental heatlh struggles.

“Respondent tells me all of that time that he is depressed,” Chyna claims in court documents related to their custody fight.

“And,” she continues, Rob “has on occasion mentioned that he felt like killing himself.”

Depression and suicidal depression are serious … though not necessarily related to Rob’s ability to be a parent to Dream.

“All of the places he says Dream goes during his custodial time,” she accuses, “Dream is going there with a nanny or family member.”

Chyna explains that Rob sends Dream out with loved ones “because respondent is too afraid to leave the house.”

For the record, we have seen video taken of Dream by Rob that was not inside of his house.

In fact, Blac Chyna alleges that she has not seen Rob more than “four times in person since the paternity judgment” was handed down.

That was in October of 2017. That would be in two and a half years as of next month.

She complains that this has allegedly led to coparenting issues.

We’re not sure how, exactly. Did she lose her phone. Did Rob lose his phone? Plenty of coparents function with apps and texting.

In his own court documents, Rob Kardashian has fired back at his baby mama’s accusations.

“I deny that I have an issue with depression or leaving the house,” he writes.

Rob explains: “My family and I are public figures.”

That is, if anything, an understatement. It’s like referring to Kylie as a vlogger because she was popular on Snapchat back when that was popular.

“There was a time when any paparazzi photo of me immediately led to very incessant negative remarks about my appearance,” Rob acknowledges.

Rob has struggled with his weight and people can be vicious and cruel, as if Rob’s flesh prison were any of our business.

“So yes,” he admits, “for a period of time, I did not want to subject myself to that;”

“I am not sure why anyone would,” Rob expresses. Wow, points for honesty, dude.

We should be clear that depression does not disqualify someone from being a good parent.

Some people are worse parents because of mental health issues.

Depression can make it difficult to remember a child’s school activity, for example.

But the majority of bad parenting in the world has to do with bad people who don’t know anything, not with mental health.

And if Rob did have agoraphobia or scopophobia, that wouldn’t make him a bad or unfit parent either.

Agoraphobia is a frad of public spaces, not of hugging your daughter.

Scopophobia is an intense discomfort with being seen, not an inability to tuck your daughter into bed.

And needless to say, Rob’s family resources — both personal and financial — mean that if he can’t step outside, someone else always can.

If Blac Chyna has any real, valid criticisms of Rob’s parenting, she should tell the court, instead of dragging depressed parents through the mud.