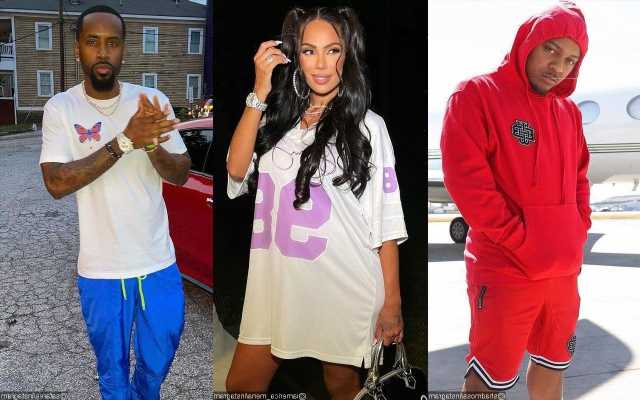 Aside from sending words of encouragement to his former fiancee, the ‘Let Me Hold You’ spitter takes to social media to flirt with his other ex, Angela Simmons.

AceShowbiz –Bow Wow has proven that there is no bad blood between him and Erica Mena despite their split. After his former fiancee admitted to taking a loss amid her divorce from Safaree Samuels, the “Let Me Hold You” spitter showed her some support on social media.

The 34-year-old MC, real name Shad Gregory Moss, delivered words of encouragement to his ex via Instagram Story on Thursday, September 16. “Erica keep yo head up,” the rapper/actor simply wrote along with a couple of heart emojis.

“The Fast and the Furious: Tokyo Drift” star’s support arrived after Erica confessed that she took an L in her marriage. “I had to go through this for whatever reason… There’s too much humiliation. Too much,” she said during an Instagram Live. “It’s an L because it’s the lowest but there’s so many lessons for me as a woman.”

Prior to that, the “Love & Hip Hop: Atlanta” star reacted to her estranged husband going out with an Instagram model named Kimbella Matos. “I’m so grateful God been making sure I find out EVERYTHING,” she wrote on Instagram Story.

“I’m very much so single and will very soon be officially divorce,” the mother of two went on, before throwing shades at her ex, “That let man send roses since he’s clearly desperate in peace. That is no longer my problem.”

Erica and Safaree tied the knot in New Jersey in October 2019. The former “Love & Hip Hop: New York” star, however, filed for divorce from the “Liar” rapper on May 21 when she was pregnant with their second child.

As for Erica and Bow Wow, they got engaged back in 2014 but split in late 2015. Bow Wow himself is currently flirting with his other x, Angela Simmons. He tweeted on Thursday, “Yo @AngelaSimmons im not playing w u no more. Wassup? What we doing ?”