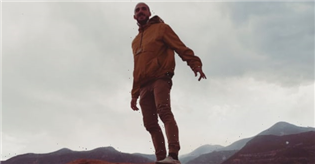 The tragic murder of Gabby Petito has evolved into one of the most bizarre crime stories in recent memory over the course of the past two weeks.

That’s because Petito’s boyfriend — who is currently the prime suspect in this case — has been successfully evading capture and leading authorities on a nationwide search with the highest of stakes.

With informants cropping up daily and former reality star Dog the Bounty Hunter joining the hunt for Brian Laundrie, the pursuit has become something of a national obsession.

And now, one tipster’s story has many convinced that Laundrie won’t be able to run for much longer.

A man named Dennis Davis tells authorities that he spotted Laundrie walking along a deserted road near the Appalachian Trail on Saturday.

According to Davis, Laundrie was close to the border between Tennessee and North Carolina, and he appeared to be in a state of severe mental confusion.

Davis says that Laundrie “was not making any sense” and seemed confused about his whereabouts.

It was only after the two men parted ways that Davis took out his phone in order to search for photos of Laundrie online.

He says he quickly realized whom he had been speaking with, and he immediately contacted the authorities.

“There is no doubt in my mind I spoke to Brian Laundrie – none whatsoever,” Davis explained.

“Dog, The Bounty Hunter’s daughter, sent me an audio file of Brian’s voice, and the voice was the same I heard.”

Davis says that despite being on foot in an east coast state, Laundrie asked for directions to California.

“He said, ‘man, I’m lost.’ I said, ‘what are you trying to find?’ and he said ‘me and my girlfriend got in a fight but she called me, told me she loves me, and I have to get to California to see her,'” Davis said.

“I said ‘well, I-40 is right there, and you could take it west to California,’ and he said,’ I’m just going to take this road into California.'”

Based on Davis’ recollection it sounds as though Laundrie might not be fleeing from authorities so much as he’s merely wandering in the woods with no real idea of where he is.

Davis says that he’s a father himself, and he hopes to assist in bringing Laundrie to justice in any way that he can.

“Obviously, as a father with a daughter, I want to do whatever I can to help the family find closure and get this guy off the streets,” he explained in an interview with Page Six.

“Law enforcement is probably getting millions of leads on this guy, but I am not some goofball out there doing drugs in the middle of the night; I am a highly educated professional.”

Obviously, only time will tell if Davis actually encountered Laundrie on the trail, or if he was simply conversing with a bewildered lookalike.

Whatever the case, authorities say that despite rumors to the contrary, they’re convinced that Laundrie is still alive and still on the run.

We’ll have further updates on this developing story as more information becomes available.