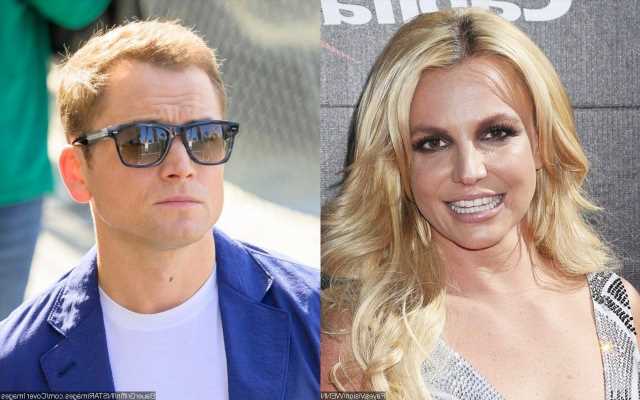 The 40-year-old pop star even brands herself a ‘freaking fan’ when she gushes over the ‘Rocketman’ star in a social media video documented by her new husband.

AceShowbiz –Britney Spears loved getting to meet Taron Egerton. Seen embracing the “Rocketman” star in a social media video documented by her husband Sam Asghari, the 40-year-old pop star branded the actor as the “coolest guy ever.”

“Coolest guy ever !!! Such a freaking fan…,” she wrote on Instagram alongside a video clip of herself hugging the 32-year-old actor. “I was so stupid!! (sic)”

In another clip, without disclosing their location or reason for their meeting, Sam could be heard jokingly interjecting their interaction and warning Taron that he “had better” get off his wife. With a laugh, he said, “You’ve gotta get your hands off my wife!”

Despite being a big fan of Taron, the “…Baby One More Time” hitmaker recently admitted that she would “rather hang out with homeless people” than celebrities, even though her wedding was attended by fellow superstars. such as Madonna and Selena Gomez.

She shared a picture with the words “God is not nice” and captioned the post, “Does that mean the devil is EXTREMELY HOT AND NICE ??? I’d rather hang out with homeless people than the people in Hollywood … JUST SAYING !!!! (sic).”

In another post, the “Toxic” hitmaker, who regained control of her multimillion-dollar fortune and various aspects of her life when a conservatorship governed by her family was terminated in 2021, explained that she had been “reflecting” on her life and is speaking out now because she “likes to be heard.”

She said, “I am grateful for today in finding my body … again reflecting and CLEARING and CLARITY this week !!! It’s good to reflect on where you have been before you know where you’re going !!! So s*** … I’ve done a lot so I have a lot of reflecting to do !!! I speak because I like to be heard … even if only one person hears me, that’s fine !!! As long as I feel heard … so whoever is reading this, hi and thanks for listening.”