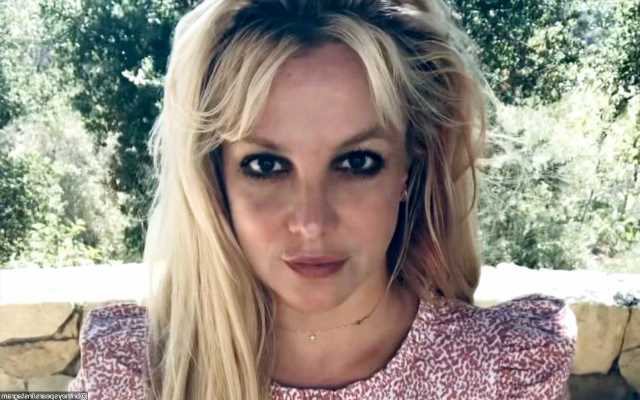 The ‘Stronger’ hitmaker gushes about ‘having the time of my life here’ as she enjoys a tropical vacation with her fiance Sam Asghari after her father was officially removed as her conservator.

AceShowbiz –Britney Spears has expressed her feelings after her latest victory in the conservatorship battle against her father. Clearly feeling liberated, the “Oops!… I Did It Again” singer has stripped down completely naked in new Instagram pictures.

On Thursday, September 30, the 39-year-old singer took to her social media account to share the racy snaps. In some of the photos, she wore nothing but her birthday suit as she posed near a bathtub. To adhere to the platform’s strict nudity policy, she put some flower emojis to cover her private parts.

In other images, the so-called Princess of Pop posed topless while hitting the beach. She covered her bare breasts with her two hands while wearing a red bikini bottom and sunglasses. “Playing in the Pacific never hurt anybody !!!!” she captioned the photos.

Stopping any potential accusations about photo edits, she added, “Pssss no photo edits … the tub curves.”

Britney is currently on vacation with her fiance Sam Asghari after her father Jamie Spears was officially removed as her conservator. Sharing a video from the tropical vacation, the mother of two appeared to be in a good mood as she was seen on a boat and frolicking in the water. “A beautiful day here in paradise celebrating,” she wrote in the caption.

Another video captured the oceanic view of her holiday destination. “having the time of my life here,” she gushed over the place.

On Wednesday, September 29, a Los Angeles judge suspended the legal oversight of her father Jamie, designating a replacement selected by the singer and her attorney. Certified public accountant John Zabel has been appointed as temporary conservator of her estate.

Jamie himself had actually filed papers to step down from his role as Britney’s conservator on September 7. He tried arguing the conservatorship should end immediately, but Britney’s lawyer Mat Rosengart begged to differ. The attorney wants to hold Jamie accountable for possible misappropriation of assets, among other things, and he wants the conservatorship in place until he can investigate.

The judge agreed with Mat and suspended Jamie. She also ordered Jamie to turn over all the books and records during his time as conservator. The judge set another hearing for November 12 to determine whether the conservatorship will be terminated entirely.

Following the order, Britney posted a video of her flying a plane for the first time. “On cloud 9 right now!!!!” she wrote along with the clip. “First time flying a plane and first time in a prop plane !!! Geez I was scared!!! Pssss bringing the ship home, JL … Stay classy beautiful people !!!! New pics coming soon!!!!”