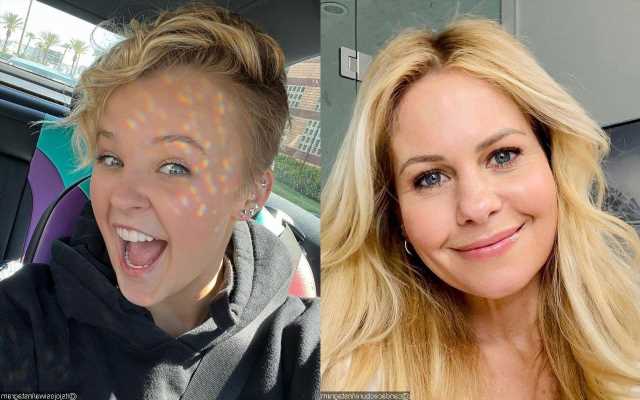 AceShowbiz –Candace Cameron Bure has spoken out about her unlikely feud with JoJo Siwa, who named her the “rudest celebrity” she’s ever met in a recent TikTok video. Making use of her Instagram account on Tuesday, July 26, the “Fuller House” actress revealed her conversation with the pro dancer as she shared that she’d apologized to JoJo for being rude to her.

“I was shocked when I saw the TikTok on Sunday,” the Hallmark Channel alum said about the “So You Think You Can Dance” judge’s video. Candace went on to share that while JoJo didn’t think her remark was a “big deal,” it was to the “Full House” star.

Of their “great conversation,” Candace explained, “She didn’t want to tell me [how I was rude to her]. She said, ‘You know, I met you at the ‘Fuller House’ premiere and I was 11 years old.’ ” Apparently, the now-19-year-old YouTuber asked Candace for a picture, but the latter said, “Not right now.”

Even though JoJo allegedly told Candace that she understands the situation as an adult, the actress felt bad for what happened years ago. So, Candace apologized to Jojo as she told her, “I broke your 11-year-old heart. Ugh. I feel crummy. JoJo, I’m so sorry.”

Before ending her video, the “No One Would Tell” actress noted the lesson that everyone can learn from the drama. “No matter how many followers you have … even a 10-second trending TikTok video can do damage because our words matter and our actions matter,” she stressed.

Meanwhile, Candace’s 23-year-old daughter Natasha Bure showed support to the actress by gushing over her in an Instagram post on Tuesday. “I wanna be them when I grow up,” the “Home Sweet Home” actress wrote alongside a photo of her parents smiling and goofing around with one another at dinner. “God gave me the coolest Mama & Papa. Could take pictures of them all day long.”

JoJo made headlines after she labeled Candace the “rudest” celebrity she’s ever met in a video which saw her participating in a TikTok challenge. “Pool day = exposed hahaha,” the Nickelodeon star captioned the Sunday video which also featured her naming the nicest and coolest stars she’s ever met.