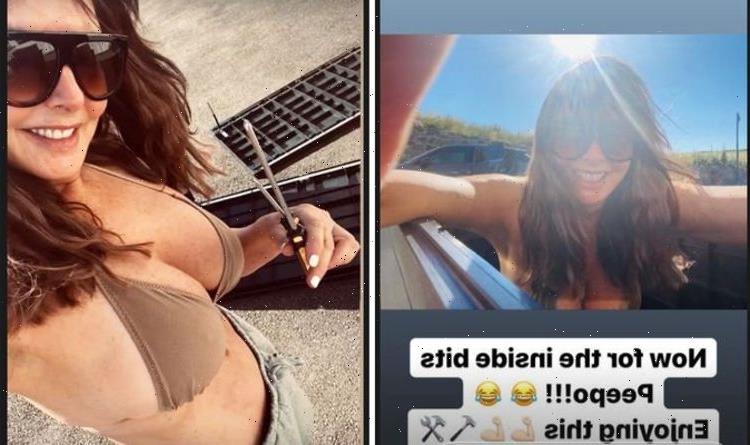 Carol Vorderman recalls time her pants got caught in her dress

Countdown star Carol Vorderman, 60, flaunted her ample assets on Instagram as she snapped her efforts to build a storage box for her new paddleboards. Yesterday, the media star detailed her time paddleboarding around the Welsh coast for the first time and this evening, the star revealed her progress as she put together an outside storage unit to keep her boards in while wearing a skimpy bikini.

In view of her 113,000 followers, the star revealed that she was attempting the DIY task in a tiny bikini due to this week’s heatwave.

Wearing a triangle-style bikini top, the mother-of-two let her brown tresses fall into natural waves around her shoulders while donning a pair of trendy black sunglasses.

Brandishing screwdrivers, the star revealed that she was well-prepared to take on the challenge of building an outside storage box for her paddleboards.

Grinning in her selfie, Carol said she was “ready for action”, as she dubbed herself a “#bikinibuilder.”

Pairing her minute bikini top with a pair of grey flannel shorts, the mathematician showed off her washboard abs and toned stomach as she mentally prepared herself for the task.

Over the next few stories, the Channel 4 star documented her box-building endeavors before revealing that she had managed the DIY feat.

Taking another selfie of herself inside the finished unit, Carol once again posed in her bikini as she showed off the finished result.

With the sun behind her, the best-selling author wrote “Peepo!” as she shared the “inside” of the box.

Taking a snap of her curvy, hourglass silhouette against her new pride and joy, the star showed off the finished result.

She wrote: “My work here is done.

“Hooray… somewhere for my paddleboard stuff,” alongside emojis of a hammer and a spanner.

However, despite celebrating her achievement, the star revealed that she had two screws leftover despite finishing the box.

Alongside a snap of the offending items, Carol penned: ” Oh b****r… some leftover screw,” next to a laughing face emoji.

“Don’t you have it when that happens??”(sic) she asked her fans.

Yesterday evening the Countdown alumni revealed that she had gone for a blissful evening of paddleboarding in her native Wales.

Ahead of a picturesque sunset, the fitness star documented herself attempting to do yoga on her new board – despite being surrounded by jellyfish in the water.

“Do some yoga on your paddleboard they said…lols…..this is my best version of a ‘downward dog’ on a board…..RUBBISHHHHH.

Another photograph showed the BBC Radio Wales DJ before she headed out to sea.

Wearing her hair loose in a tousled beachy look and sporting her skintight wetsuit, she smiled as she soaked up the last rays of sunshine.