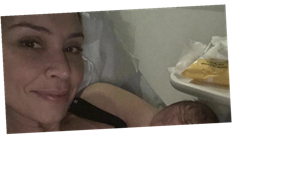 Christine Lampard has announced she has given birth to her second child with husband Frank Lampard.

The new mum-of-two announced the happy news as she shared a photo of her cradling her newborn son on Instagram.

She wrote in the caption: “Let us introduce you to our newest addition. ..Frederick (Freddie) George Lampard! We are completely in love @franklampard”.

The couple are already parents to daughter Patricia, two. And Frank has daughters Luna, 15, and 13 year old Isla from his relationship with Elen Rivas.

Christine was flooded with messages of congratulations from celebrity friends and fans in the comments of her announcement post.

TV presenter Ore Oduba wrote: “Ahhh you did it!!!! Congratulations Christine and the Lampard clan. Beautiful!!!”

Christine, who was reportedly heartbroken as her husband Frank lost his Chelsea manager role, hasn’t posted much on her social media since announcing her pregnancy.

But, she did share a stunning photo of herself cradling her bump while wearing a red knitted jumper with the word ‘love’ on after appearing on Loose Women.

As she posted the gorgeous image, Christine wrote in the caption: “Thank you @loosewomen for the catch up today! feeling the love in my @sarahalexandraboutique_ jumper” next to a red heart emoji.

Christine discussed her pregnancy as she appeared on Loose Women via video link in January.

She revealed she was due to give birth in April as she told the panelists: “Well because dates aren't exactly… we aren't entirely sure. We're thinking by the size of it, it's April. Early April. It's not that far away now actually.

“We kind of thought during Christmas, ‘Once January comes, suddenly we're on the last trimester part.’ So yeah, it'll be here before we know. We can't believe it.”

“It's personal happiness. It's something within the four walls of our house, where we spend most of our time, is something we're looking forward to?”