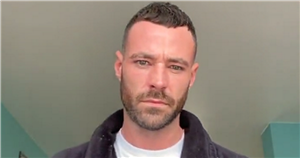 Sean Ward has been arrested at an anti-vaccination protest in London on Friday 3 September.

In pictures obtained by The Sun Online, 33 year old Sean, who is known for portraying the role of Callum Logan on Coronation Street, can be seen handcuffed and being taken away by police in Canary Wharf.

The TV personality was photographed outside the Medicines and Healthcare products Regulatory Agency (MHRA), where a group of people gathered to protest against vaccinations for children.

It's unclear why Sean was taken away in handcuffs. However, OK! Online has approached both Sean's representatives and the police for further comment on the matter.

Earlier in the day, the actor took to his Instagram stories to post several clips of the protestors, over which he wrote: "Kids dont need an experimental jab PROVE US WRONG".

In another video, he shared: "So we are at the MHRA building, we've got two people inside the building…"

He then spoke about a woman inside who is "vaccine-injured" and wants to "tell her story", before explaining to his followers that police had locked the doors and wouldn't let anyone inside.

Officials at the vaccine advisory body – Joint Committee on Vaccination and Immunisation (JCVI) – confirmed today that they won't be recommending jabs for healthy kids between 12 to 15.

Speaking of the protest, Police said today: "We have officers attending a demonstration outside a commercial building on Cabot Square in Canary Wharf.

"A number of officers are on scene, guarding the entrance to the building. Officers also continue to attend a demonstration by separate group in Canary Wharf along Bank Street.

"Arrests have been made and units remain on scene."

They later tweeted: "A number of protesters became violent towards police. Four of our officers have been injured during clashes.

Soap stars in the news

"This is unacceptable. We remain on scene. Updates to follow."

For all your updates on Sean Ward, sign up to our daily OK! newsletter.