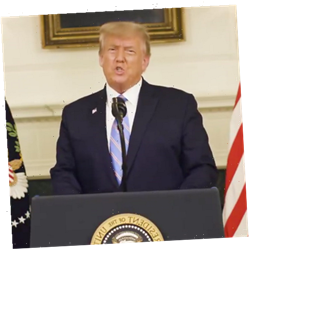 Backed into a legal corner, facing yet another rumored impeachment and/or the possibility of actually being thrown out of office via the 25th amendment, Donald Trump at last said these words on Thursday evening:

A new administration will be inaugurated on January 20th. My focus now turns to ensuring a smooth, orderly, and seamless transition of power.

It only took an armed insurrection by his followers, too.

“Like all Americans, I am outraged by the violence, lawlessness and mayhem,” Trump said in a video statement he released via Twitter, adding:

“America is and must always be a nation of law and order. The demonstrators who infiltrated the Capitol have defiled the seat of American democracy.”

This, of course, is a VERY different tone than the one Trump struck shortly after his supporters stormed a government building and ended up responsible for five deaths.

Including that of a police officer.

After this attempted coup, Trump referred to the terrorists who incited it as “special people” and he said he loved them.

In response, Facebook banned the President from its platform for the rest of his term.

With speculation swirling that he may truly become the first-ever Commander-in-Chief to be thrown out due to thhe 25th amendment?

Or perhaps finally aware that his legacy will be as a President who encouraged an insurrection against his own country’s elected officials?

Trump has given in to mounting pressure — from all around, including from prominent members of his own party — to at least act and sound conciliatory.

“To those who engaged in the acts of violence and destruction, you do not represent our country. And to those who broke the law, you will pay,” he continued on Thursday.

Treasury Secretary Steven Mnuchin and Secretary of State Mike Pompeo were among the Cabinet secretaries who discussed the possibility of invoking the 25th Amendment to remove President Donald Trump, three sources have told CNBC.

This might help explain why Trump uttered many lies in his latest video message.

But that he also, for the very first time, admitted that Joe Biden will be the next President of the United States.

In this nearly three-minute long video, Trump attempted to justify his months-long challenge of the election results as an effort to “ensure the integrity of the vote.”

This, despite never presenting a shred of evidence that the integrity of the vote was ever in question.

Trump, therefore, now says he will focus the remainder of his time in office on ensuring a smooth transition of power.

“Serving as your president has been the honor of my lifetime,” Trump concluded.

“And to all of my wonderful supporters, I know you are disappointed.

“But I also want you to know that our incredible journey is only just beginning.”

A White House adviser in discussions with senior officials, meanwhile, tells CNN that Trump recorded the video merely because his presidency is threatened by looming resignations and potential impeachment.

“I think that video was done only because almost all his senior staff was about to resign, and impeachment is imminent,” the adviser said.

It also came more than two months too late.

“That message and tone should have been relayed election night … not after people died,” the adviser added.