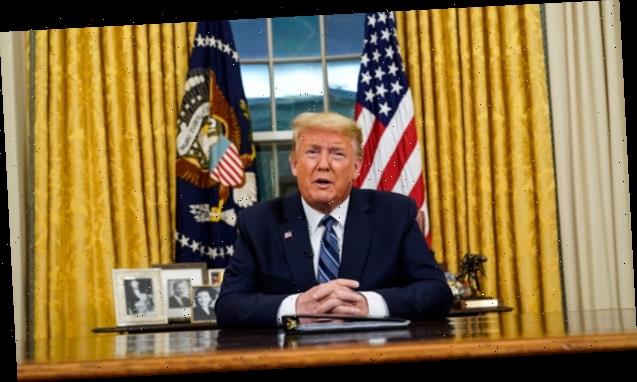 The travel ban will start on Mar. 13 in an attempt to stop the spread of COVID-19 after more than 1,000 cases and 30 deaths in the U.S. have reportedly been confirmed.

President Donald Trump, 73, shocked the world in a live national address on Mar. 11 when he announced that he’s banning all travel from Europe, with the exception of the United Kingdom, to the United States starting at midnight on Mar. 14 to help stop the spread of the coronavirus. “We are responding with great speed and professionalism,” he advised viewers during his speech about the careful decision. “There will be exemptions for Americans who have undergone appropriate screenings. And these prohibitions will not only apply to the tremendous amount of trade and cargo. But various other things as we get approval, anything coming from Europe to the United States.”

The announcement came after the U.S. cases of COVID-19 capped at more than 1,000, including around 30 deaths, and and 120,000 cases worldwide, according to the Washington Post. Trump said that there are significant clusters of the virus in the states of California, New York, Florida, and Washington state and that they were “seeded” by travel from Europe. The World Health Organization also declared coronavirus a pandemic on the same day Trump made the travel ban announcement. “We are deeply concerned both by the alarming levels of spread and severity — and by the alarming levels of inaction,” WHO director, General Tedros Adhanom Ghebreyesus said.

This story is developing…