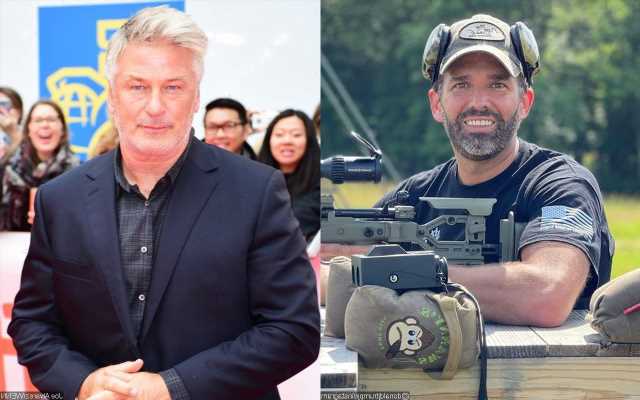 AceShowbiz – Donald Trump Jr.‘s attempt to profit from a tragedy involving Alec Baldwin has backfired. The eldest child of former president Donald Trump has been blasted online after selling T-shirts that mock the “Rust” shooting.

Just days after the accidental shooting that killed cinematographer Halyna Hutchins, Trump Jr. is offering tees that read, “Guns don’t kill people, Alec Baldwin kills people,” on his website. The T-shirts, which are available in black, navy, heather gray and military gray, sell for $27.99 a piece.

Needless to say, Trump Jr. has been heavily criticized for his “insensitive” move with the T-shirts. “This family is absolutely toxic,” one enraged Twitter user posted along with a picture of the T-shirt. Others soon commented, with one slamming the family, “I think there is a genetic problem with this family.”

Another called out the trustee of The Trump Organization, “This animal turns my stomach.” A fourth said it’s “absolutely disgusting!” Someone called it “sad,” while another dubbed Trump Jr. a “psychopath.”

“Christ. We’ve all known this for decades, but there isn’t a single person in that family who has any semblance of a soul. This is absolutely disgusting and he should be embarrassed, but that’s not possible without the aforementioned soul,” another critic weighed in.

Another added, “HeyDT Jr You are a pathetic excuse of a human. Slither away and snort some of your daddies coke!” Someone else remarked, “This is despicable.”

Meanwhile, some others raised a conspiracy theory that a Trump supporter might be behind the shooting. “I’m guessing a Trump supporter may have been behind loading the gun that tragically killed cinematographer Halyna Hutchins to get revenge for Baldwins Trump impersonations.” Agreeing, another said, “I wouldn’t be surprised if a Trump supporter worked on the set of Rust. Trumps hated Alec.”

Baldwin discharged a prop gun on the set of “Rust” on October 21, accidentally killing Hutchins and injuring director Joel Souza. He later issued a statement on Twitter which read, “There are no words to convey my shock and sadness regarding the tragic accident that took the life of Halyna Hutchins, a wife, mother and deeply admired colleague of ours.”

The “30 Rock” alum added, “I’m fully cooperating with the police investigation to address how this tragedy occurred and I am in touch with her husband, offering my support to him and his family. My heart is broken for her husband, their son, and all who knew and loved Halyna.” He has been questioned by police, but no charges have been filed.