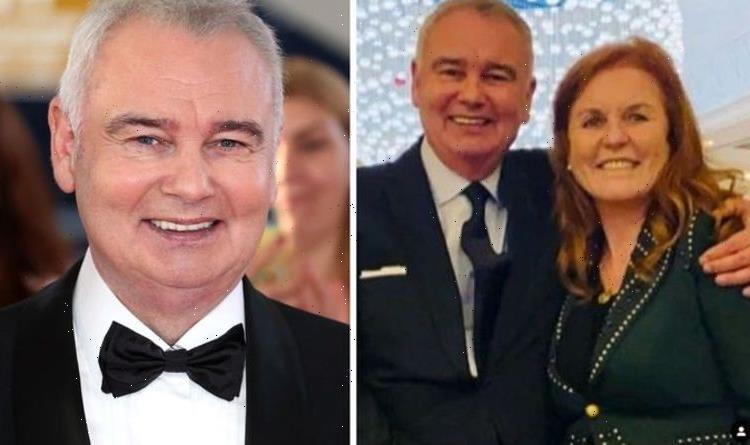 Eamonn Holmes, 61, took to social media to share an update with his 746,000 Instagram followers after attending the Inspiration Awards. The This Morning star was snapped with Sarah Ferguson, also known as Fergie, at the showbiz event.

The beaming TV star wrapped his arm around the Duchess of York as he posed for a picture with the 61-year-old royal.

“#FergieTime…” he captioned the photo when he shared it online shortly after their meeting.

“Great afternoon with the lovely Sarah Ferguson. Always fun,” he went on to add.

The pair headed to The Corinthia Hotel in central London for the star-studded award ceremony.

Sarah, who became a grandmother for the second time last month, looked to be in high spirits at the London bash.

She opted for a little black dress with a dark green blazer for the occasion.

Meanwhile, Eamonn was dressed to impress in a classic black suit.

The Duchess’ daughter Princess Beatrice welcomed her first child into the world on September 18.

It would appear that it was the latter who took the picture of her pal Eamonn and Prince Andrew’s ex wife.

“So thank goodness I can take a good photo,” she wrote in the comments section of the post.

The 51-year-old TV star also shared pictures from the event on her own account, and was also snapped with Fergie.

“Such a fantastic afternoon and lovely to meet @sarahferguson15.

“What a genuine woman and what fun we had. #herheartforacompass,” she wrote alongside her social media offering.

An earlier picture, posted on her story, showed Lucy with her “date” Eamonn.

A silver clutch completed her glamorous look for the outing.