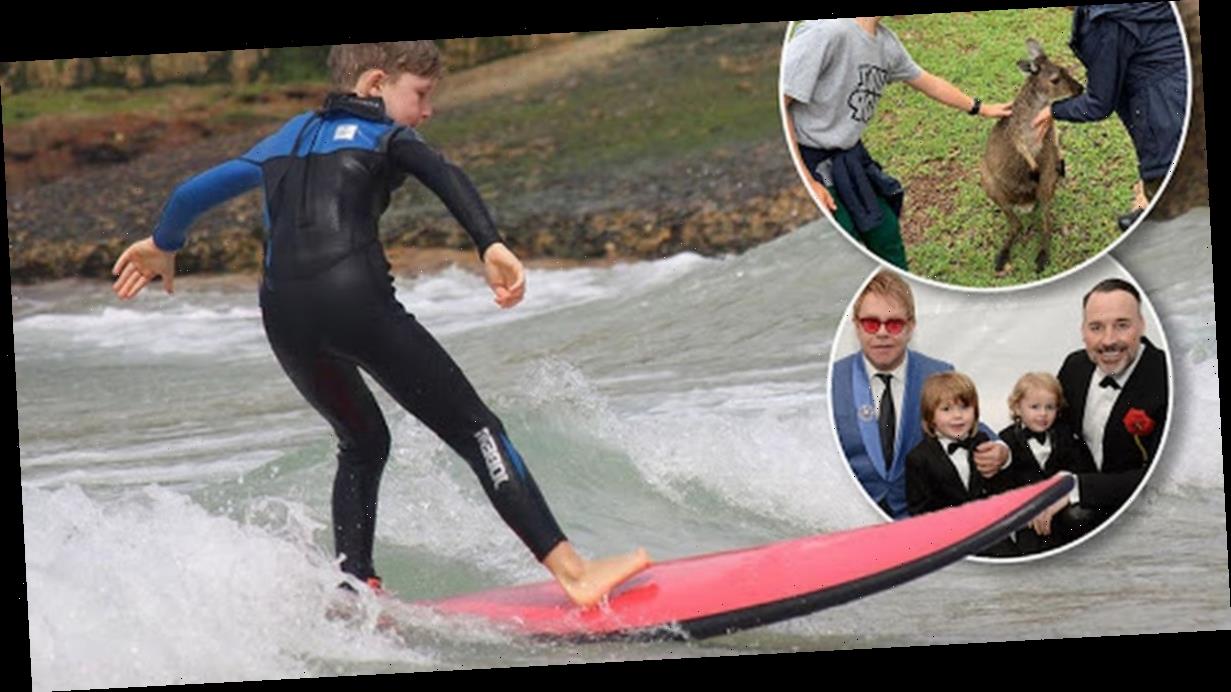 Sir Elton John has just completed the Australian leg of his Farewell Yellow Brick Road tour, and he made sure while there, that he enjoyed some quality time with his family.

The I'm Still Standing crooner shared several snaps to his Instagram account of his two young sons, Zachary, nine, and Elijah, seven,taking in quite a few fun activities and generally enjoying some of the beautiful sights the country had to offer.

The singer, 72, shares the youngsters with David Furnish, who he has been married to since 2010.

And it is extremely rare that Elton's boys are caught on camera, as he and David seem to keep them mostly out of the public eye.

But the kids seemed to have had a wonderful time, and were pictured taking part in various activities, from surf boarding, diving, petting kangaroos, feeding giraffes, fishing in the ocean and going for scooter rides.

And Elton made sure to share just how much he, David and their boys had enjoyed their down time in Australia with his fans.

The music legend wrote on his Instagram page: "you have stolen our family’s heart. We’ve been residents here since the end of November and we are sad to say good-bye.

"We want to say huge thank-you to EVERYONE who has welcomed our family so warmly. From the waves at Bondi Beach to the breathtaking beauty of the Great Barrier Reef, our sons have learned so much about this beautiful country. It’s been the trip of a lifetime and an experience we will treasure and never forget."

He continued in a second post: "The fans at every show have been AMAZING and the teams at all the local venues have been brilliant.

"Huge thanks to everyone at Bondi Nippers for teaching the boys about water safety and rescue.

"Even bigger thanks to the extraordinary team who helped run our home so smoothly.

He also thanked the press for not intruding on the family while they were out and about.

He expressed: "Thanks also to the Australian press for respecting our family’s privacy – which allowed our sons to freely explore Australia’s treasures without distraction. Au revoir from the Furnish-John Family. We can’t wait to come back!"

Last month Elton John was forced to postpone two concerts in New Zealand after he was diagnosed with walking pneumonia.

The Candle in the Wind singer was supposed to perform two more gigs at the Mount Smart Stadium in Auckland but the shows have now been pushed back to January 15 and 16 2021.

Promoters had said just hours earlier that Elton would be well enough to perform, despite being forced to end a show at the same venue last week following his diagnosis.

In an emotional statement, Elton said he was "incredibly disappointed" to have to postpone the gigs on doctors' orders.

He said: "I want to send my sincerest apologies to my amazing fans for any inconvenience caused.

"I am grateful for the love and loyalty I have been shown by all of you and I can't wait to return in January next year to perform my final New Zealand shows."

Fans who are unable to attend the rescheduled gigs have been asked to contact Ticketmaster for a refund.

The week prior, the Grammy and Oscar winner broke down in tears after losing his voice in the middle of a show at the stadium in Auckland.

In footage shared by fans on social media, Sir Elton is seen crying as he is escorted from the stage while thousands of concert-goers give him a standing ovation.

Sharing the emotional snap of him being supported by medics as he struggled to fight back tears on stage, Elton wrote: "I want to thank everyone who attended tonight's gig in Auckland.

"I was diagnosed with walking pneumonia earlier today, but I was determined to give you the best show humanly possible. I played and sang my heart out, until my voice could sing no more."

Walking pneumonia is an infection caused by bacteria that primarily affects an individual's lower and upper respiratory tract.