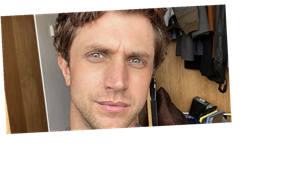 Kris Mochrie has been left "gutted" after thieves broke into his car and stole his laptop.

The actor, who was revealed to be dating co-star Max Parker, took to Instagram to lash out at the people who targeted him.

Sharing a picture of the car on his Instagram stories, the glass is completely shattered after the windows were busted through.

"My laptop was in a bag in the boot for an hour and some scumbags did this," he wrote.

The former Emmerdale star's unfortunate incident comes after he confirmed he was dating his co-star Max.

The pair played on-screen brothers, but never shared any scenes together, with Kris leaving the soap in 2019 after a brief stint of playing character Lee Posner.

Kris and Max, 28, jetted off on their first holiday as a couple to Dubai earlier this year.

Speaking about their growing closeness at time, a source told The Sun: "They met on Kris' last day filming and just hit it off.

"They were cast as brothers and are really alike and have been joking that casting did a great job.

"The boys kept in touch after Kris finished on the show but they've spent a lot of time together over summer," the insider continued.

Kris confirmed their relationship in September when he told the Mirror how grateful he was to meet Max through Emmerdale.

"It's great to meet someone through work and have so many things in common and an understanding of each other's jobs," he explained.

"We didn't actually share any scenes together on Emmerdale but kept in touch after I left."

The ITV star, who isn't the only Emmerdale actor to be dating a co-star in real life, went on to admit that he doesn't want to "jinx" things between the pair.

"I don't want to jinx things. We are seeing how we get on. We had a great time on holiday in Dubai. Let's see how it goes," Kris continued.

Since leaving Emmerdale, the TV star has had a complete change in career and is now working in the hospitality industry as a senior director at The Shankly Hotel in Liverpool.