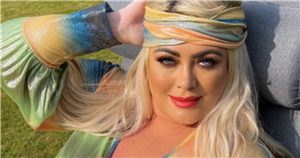 Gemma Collins has dropped a whopping £3,195 for a sensational life-sized giraffe figurine that holds her extravagant chandelier.

The former The Only Way Is Essex star showed off her new purchase, created by Italian designer Marcantonio Raimondi Malerba, on her Instagram Stories over the weekend.

Gemma gushed about the piece, which is positioned in her living room and stands at 2.7metres tall, admitting to her followers that she was "over the moon" with it.

The delighted reality star tagged the company Courthouse Interiors, who described the piece as something "guaranteed to be a loveable, eye-catching feature and talking point in your property."

Gemma, who is currently renovating parts of her home, showed off her flair for interiors as she placed the quirky giraffe statue in between two hot pinks sofas.

Meanwhile, as well as home interiors, Gemma has also been focusing on her rekindled romance with Rami Hawash.

The GC got back together with her former flame Rami in April this year. The pair were previously engaged in 2013.

Gemma recently shared her plans to try for a baby next year with her beau Rami.

Gemma, who recently spoiled her boyfriend with lavish birthday gifts, suffers from polycystic ovary syndrome and has tragically miscarried in the past.

But, now Gemma hopes to start a family with her 46 year old boyfriend.

She told The Sun: "I'm going to have a baby next year. Rami and I are going to try — we're really excited about that."

Gemma hopes to document her journey to becoming a mother with a TV show.

She added: "It's not so easy for me to get pregnant because of PCOS, so we're going to make a show about that called Gemma Collins: Making the Baby."