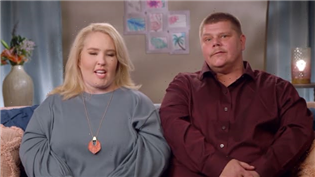 As she has documented herself on many occasions of late, June Shannon is doing pretty well these days.

The reality star, who rose to fame as the mother of former child beauty pageant contestant Alana “Honey Boo Boo” Thompson, has said she’s over one year sober and is trying to repair the fractured relationship with her children.

We applaud her for these efforts.

We can now confirm, however, that Shannon’s long-time boyfriend, Geno Doak, is not doing nearly as well.

According to new legal documents obtained by TMZ, Doak was sentenced to 16 months in Macon Community Corrections after agreeing to a plea deal on July 29.

But there’s a pretty enormous catch:

Yes, Doak will be registered as an inmate, but he will actually reside behind bars. He simply must follow some strict rules — or risk getting tossed in the slammer for real.

Doak and Shannon were arrested for crack cocaine possession in March 2019.

At the time, the couple was discovered — in the midst of a heated argument — in the parking lot of an Alabama gas station.

Police had been called to the scene due to a reported domestic dispute and arrived to find a glass pipe with white residue, a green pill and needles on the floor of their car.

Earlier this summer, June was sentenced to 100 hours of community service as a result of the incident and ordered to remain clean and sober.

If Doak serves out his unusual 16-month “sentence,” he’ll be placed on two years probation.

About two years after her arrest, Shannon admitted that she and Doak spent $1 million on drugs over the course of several months… at the height of their addiction.

They used pawn shops on a frequent basis during this period of time and lived out of a hotel.

“I went into rehab with $1.75 to my name,” June told Access Hollywood this past spring. “And I came out with nothing.”

Despite an ordeal that left her broke… left her without many of her teeth… and without most of her eye sight… and left very estranged from her kids, June remained with Doak.

On the June season finale of Mama June: Road to Redemption, Shannon even said she may move in one day soon with Geno.

This episode was filmed many weeks before it aired, however, and many months before Doak was given this new sentence. We can’t say for certain at the moment where things stand between the pair.

“I need y’all to know how much y’all did hurt us,” Lauryn told Geno on air, adding:

“I was really angry. At myself, at y’all, literally everybody…

“I think it’s good for you and Mama both to hear Alana’s side because I’m older, I can shelter my feelings like I need to, but Alana tends to hold things in.”

Lauryn eventually acknowledged that both Geno and June had been more understanding since they had gotten sober, even giving them props for being able to listen and “move past all the hurt.”

“I’m terribly sorry, I regret the things that have happened and I want you to know there’s nothing that we wouldn’t do for you guys,” Geno said to her.

“We love you all and I said I’m extremely sorry.”