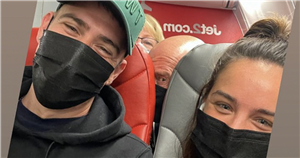 Georgia May Foote appeared to be flying high in more ways than one as she shared a photo on social media of herself beaming next to her new fiancé Kris Evans on a flight back to the UK.

The 30-year-old got engaged to her partner Kris during the couple’s romantic getaway to Gran Canaria, where they spent Christmas and rung in the New Year.

In the image Georgia uploaded to Instagram Stories on Sunday, she is sat on a plane beside Kris – the pair seen clearly sporting identical wide smiles behind their masks as she captioned: “Happy Holidays with my family @krisevansmusic."

Before leaving the stunning destination, the actress posted a series of shots of herself enjoying a swim outdoors in a picturesque setting beside a tall tree with the sun beaming overhead.

“Goodbye Gran Canaria. Thank you for the most special memories,” Georgia wrote.

The Coronation Street star had previously shared with her 544,000 followers that she had become engaged to long-term boyfriend Kris whilst they were holidaying on the island and reflected on Sunday what this special trip meant to her following the news.

“Happy New Year!” Georgia captioned a photo she posted of herself looking positively glowing as she wore a green leopard print mini dress.

“Can’t believe moments after this picture we got engaged.

“2021 was a good year. From qualifying as a nail technician and having a successful side hustle @gmfnails, to ending the year filming a great show I can’t wait for you to see in 2022.

“But most of all I found happiness. I pushed myself out of my comfort zone, stopped caring what people thought, made some amazing friends in the salon, still smashed acting and became someone’s forever.”

The TV star went on to wish her followers a great new year as she finished off the grateful post with a new title she had coined for herself, “Mrs E to Be”.

Georgia has experienced much change after she revealed, aside from becoming engaged, that she had put acting aside to become a nail technician – qualifying officially after completing training during lockdown.

"Ok so this is a very different post for me but please…. hear me out,” she wrote to fans in a post earlier this year.

“I have been an actress for 22 years of my 30 year life and i wouldn't change it for the world. And I never will. I recently qualified as a nail technician and I am super proud of myself for the reason i am about to explain.

“I have had people asking if i am quitting acting, if my work has dried up, if i am skint. The answer to all of the above is HELL NO.

"As a creative person who loves having her nails done, i thought 'why not fill my days making other people feel good, pushing my artistic side and feeling productive?'"

For updates on all your favourite celebs, sign up to our daily newsletter here.