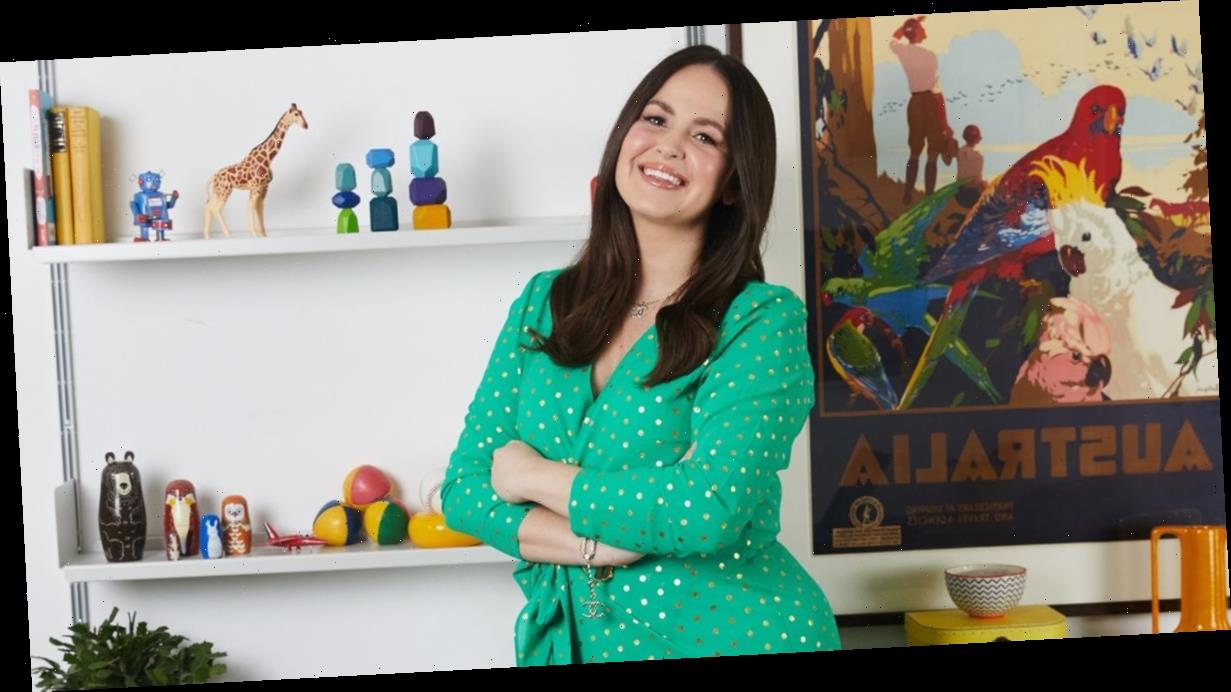 As a mum of three lively boys it’s safe to say Giovanna Fletcher always has her hands full. From the busy school run to action-packed adventures in the outdoors.

But, there are some things about motherhood that no one is prepared for. In an open and honest interview exclusively for OK! VIP members, I’m A Celebrity winner, 36, opened up about her son Buzz braking his arm and his brother Buddy, five, splitting his head open – sending her into “fight or flight mode”.

Are you part of The OK! VIP Club? If not, why not? It’s free and gives you backstage access to stories like this, exclusive home tours, special discounts and so much more! All you need to do is pop your email address below! P.s. if you’re already seeing this article in full, congrats – you’re already on our guest list! Since winning the hearts of the nation along with the I’m A Celebrity crown last year, Giovanna Fletcher has been busy getting back to what she does best – being a mum.

The author has left memories of the ITV reality show’s Welsh castle behind to return her focus to her beloved boys – McFly pop star hubby Tom Fletcher, 35, and their sons Buzz, seven, Buddy, five, and Max, who’s two.

But ever the businesswoman, Gi can’t resist taking time out from family life to pose in our exclusive shoot to celebrate her upcoming Happy Mum Happy Baby virtual event, based on her hugely successful podcast of the same name.

We catch up with the 36-year-old over the phone after the shoot – and we’re delighted to report that she is just as much the ray of sunshine she proved herself to be on I’m A Celebrity.

“It’s so nice to feel a little glamorous after being in loungewear for so long!” laughs Gi. “I feel like every day out at the moment is special.”

To receive big exclusives like this to your inbox every week, sign up to our VIP newsletter here.

And now that the boys are back in school, Gi has big plans. She interviewed the Duchess of Cambridge about motherhood on her podcast and now has her sights set on former First Lady of the US, Michelle Obama – her dream guest.

“I’d love to know what it was like to bring up girls in the White House,” she beams.

Here, the Queen of the Castle opens up about all things mumsy…

Hi Giovanna! Describe life in the Fletcher household for us…

The Fletcher household is loud and chaotic! It’s full of fun and adventure. We love going for walks with a hot chocolate in our flasks and a can of squirty cream. We are best when we’re outside. I would love to have a family who are into arts and crafts, but that’s
not us. We’re a physical family who need to be out doing stuff.

What sort of parent are you?

I am a mash-up. I have moments where I’m really playful and we’re having lots of fun. Then moments when I’m really chilled and relaxed – letting them jump around and do what they like. Then I can be quite firm. I think homeschooling has made every parent firm at times. Having three kids who squabble, it’s about trying to listen to them and letting them settle their own differences.

What’s it been like trying to keep the boys entertained while we’ve been in lockdown?

All we hear all the time is, “Mum, Dad, will you play with me?” I created three of them for a reason! To play together! It has been challenging. There are only so many times you can go on the same walks and expect them to find it fun. We’ve just discovered sleepovers. We go into a room we don’t usually sleep in with our sleeping bags and it’s amazing. But I think they are ready to see other people and be away from us now.

How did you feel about them going back to school?

Excited. Last June, we didn’t send them back because it didn’t make sense for us. But this time, I feel like they need it.

Have you missed having them at home with you?

It’s a mixture of feeling a little lost at first but also getting stuck into work. We’ve had to not be as productive as we usually are. That has built an anxiety and worry. Tom and I wondered if we might just go back to bed and sleep on that first day! There’s definitely that feeling of being able to breathe again.

He was on his bike going down a hill and his wheel must have gone down a hole. We weren’t sure how bad it was, so we waited for an hour to see if it eased off. But then he tripped over a pillow and landed on it again. I tried to put a bandage on it but even that made him cry. So we phoned 111 and the doctor said it was best he went for an X-ray just to be sure, where we found he’d fractured it.

Boys who like climbing up trees hurt themselves a lot. You’re forever telling them to stop, but they never seem to listen. But for us, the worst one was when I was pregnant with Max and Buddy slipped against the coffee table and split his head open. I went into fight or flight mode, but thankfully he was OK.

Would you say all the boys are similar in their personalities?

They are very different! Buzz is our little showman. There was a period where he wouldn’t go anywhere without his guitar around his neck. Buddy is our nurturer. He’s very hot-headed but free-spirited. Max is our cheeky little Buddha. He is so happy and funny. He picks up so much from his big brothers.

You and Tom are childhood sweethearts. What makes your relationship so strong?

Because we’ve been together for such a long time, we know each other’s strengths and weaknesses. We try not to take things too seriously. We look back to when we were kids who met at 13 and it’s crazy to think we grew up and shared this life together. We will always have that. And respect for each other. It’s not perfect but we are best mates.

What was it like being the girlfriend of a pop star when McFly started?

I remember being on Carnaby Street and hearing the screams from girls. I was really taken aback by it. Being a girlfriend is seen to be a lot more glamorous than it is. I remember for years wanting to go on tour, then when you do you realise you’re just following someone around and it’s not as much fun as you think.

My experience of being the girlfriend of a band member is slightly different because the boys are so down to earth. They haven’t been bothered by sex, drugs and rock’n’roll. They’ve had their moments [laughs] – but not Tom.

Have you had to support Tom through low times in his career?

Of course. There have been moments where we’ve had to support each other. It sucks when it happens but when you look back you realise how far you’ve come.

What’s the secret to your happy marriage?

At the moment, every night we try to watch This Is Us. We spend the last bit of the day crying together watching it. It’s a very emotional show! It’s about knowing when things drift and when to pull things back.

Is it true that you’d like to renew your vows for your 10-year anniversary?

Yeah! On our honeymoon, we said we had to go back when it’s been 10 years. Tom and I had been together for 11 years before having the boys, so our focus had been on each other for such a long time. Then when you have children, everything becomes about them. But we’ve said goodbye to that baby stage of life.

There’s that feeling of us coming out the other side. So it would be lovely to stamp that again in a way that says we are the rock and this is what holds our family together, so let’s celebrate that.

Your podcast is a huge success and you have interviewed the Duchess of Cambridge. What about having Meghan on next?

That would be amazing. I’m sure Meghan’s interview would have similarities and differences to other people we’ve had on. I missed her sharing the news about her miscarriage because I was in the castle at the time. But I think it’s so incredible when women who have a platform like hers share, because it is the loneliest grief.

Incredible. She was just so elegant and poised. When you see her talking to anyone, she really is engaged and listens to every word they are saying.

Would it surprise you if she had a fourth child?

Is that not on the cards?

I don’t think so, no. Never say never, but I feel so lucky and grateful to have the three boys. I spent a lot of my third pregnancy wondering if I was pushing my luck. I felt worried I was expecting too much to have another baby and for it all to be such plain sailing. That was something that definitely followed me through the whole pregnancy. I feel very thankful to have the children I do.

Do you ever feel like you need some female company?

I’m not yearning to have another woman in the house. If we had a girl, she’d be doing all the things the boys would do anyway. Whatever you get as a parent, you’re lucky.

I guess you have to wonder what you’ll achieve by having a girl and what do you think you’re missing by not having that. If we went for a fourth child, it would be to have a fourth child.

How’s life been for you since winning I’m A Celeb ?

It was so surreal. I was flabbergasted. Even when I got my phone back, Tom and I just laughed down the line for about 15 minutes. We all sat in the hallway and cuddled for a while when I came home.

Has going on the show changed your relationship with Tom?

It’s made us appreciate each other a lot more. It’s changed in some ways. But it’s a moment we will always look back on and cherish.

How did he cope with the boys while you were away?

We do everything 50/50 anyway. I had no worries about Tom being with the boys because it is such a team effort with us. I knew they were in safe hands.

It’s at the end of this month. We don’t have the same support network we would normally have as mothers. That community was really nice when we did a virtual event last time. So we’re doing another to cover topics we haven’t before.

There’s also going to be activity-based things like cooking to do with the kids. It’s completely free, which is so important. I always want to be accessible.

Thank you for signing-up as an OK! VIP member!