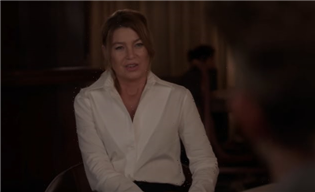 Grey’s Anatomy may be long in the tooth, but it can still deliver some vintage drama.

The long-running medical drama returned for its 18th season Thursday night, and the episode was bursting at the seams with wild developments.

For one, the show now takes place in a post-COVID-19 world.

If you watch Grey’s Anatomy online, you know the show devoted an entire season to the real-world virus that has ravaged the world for almost two years.

One would expect a big time-jump to account for the show switching gears, but nope, the premiere took place mere months after the last season wrapped.

We already knew Kate Burton was returning as Ellis, but we didn’t expect her to haunt her daughter in her dreams.

Ellis wanted her daughter to move on to the next great chapter in her life, and when you consider what Meredith has accomplished to date, the return made sense.

Our titular character went to Minnesota, but was she really considering leaving Seattle and the people she loved behind?

Well, let’s just say she ran into an old face that completely changed her opinion of the place.

David lured Meredith to the hospital under the ruse of building a library and devoting it to her late mother.

The storyline got a much-needed jolt of life when David walked Meredith through a door that said “The Grey Center for Medical Research.”

Yes, David had an ulterior motive. He wanted Meredith to work in a research center named after herself to cure Parkinson’s disease.

Meredith was understandably stunned, wondering why David couldn’t go to the FDA himself.

“Because I’m the patient,” he revealed as Meredith realized the true nature of the trip.

Despite Bailey, Cormac, and Weber calling Meredith relentlessly, telling her to come home, we’re left in a precarious situation.

Meredith bumped into Nick (Scott Speedman), a man she treated several seasons earlier, and for some reason, the fans wanted them together.

With Nick living in Minnesota and Speedman being confirmed as a series regular for Season 18, should we expect Meredith to leave Seattle behind?

We don’t quite know the answer to that question, but hey, at least the show still knows how to shock us.

During an impromptu dinner date, Meredith revealed that she had been dating Cormac, but his son didn’t want to let her into his life.

The relationship came to a close, but it’s clear based on the many phone calls between Mer and Cormac that the show is still teasing a pairing for them.

Seriously, what is it with this show and love triangles? Alas, Meredith told Nick she would be going back to her own hotel room.

Could the show be setting up a spinoff with Mer away to Minnesota, or is the show merely making fans think the show is ending?

Ellen Pompeo recently revealed she couldn’t wait for Grey’s Anatomy to end, after all. It’s not been a great week for the star after being criticized for saying she screamed at Denzel Washington on set.

Elsewhere on this stuffed premiere episode:

– Teddy and Owen attempted to get married in a park, but the priest died after being hit with a bicycle. Fear not, they got married at the end of the episode.

– Maggie returned from her honeymoon with a sex injury (thank you, handcuffs!) and had to make several excuses about what happened.

– The hospital faced a staff shortage, and one of the new plastic surgeons criticized the residents’ skill, leading Weber to say he’ll make sure they’re up to scratch.

– Link and Amelia continued their squabble about marriage, with Amelia professing her love to him. “I can, but I don’t want to. And you used to not want to with me,” she said to a confused Link.