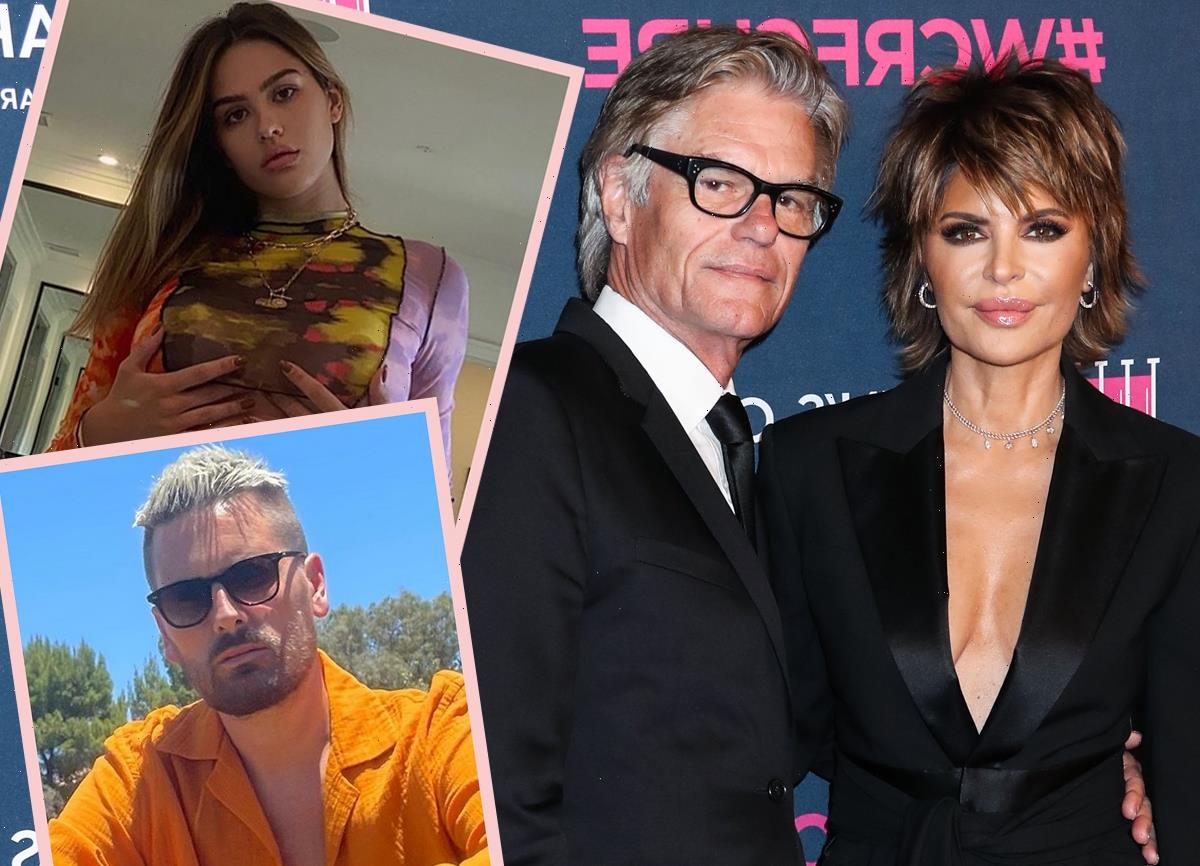 Harry Hamlin clearly does NOT feel like worshipping at the altar of Lord Disick!

…But he’s also not totally put out by the idea of his 20-year-old daughter Amelia Hamlin dating a man 18 years her senior, who also happens to have three growing children of his own already.

The 69-year-old actor appeared on Wednesday night’s new episode of The Real Housewives of Beverly Hills, where he spoke openly for the first time about Scott Disick dating his model daughter.

Alongside his 57-year-old wife Lisa Rinna, Harry invited the Bravo ladies over to his home for a surprise birthday party for RHOBH co-star Garcelle Beauvais. And before the guest of honor could arrive, Harry sat down and spoke with cast members Dorit Kemsley and Kyle Richards, who wanted to know about the couple’s plans to build a big new pool in their backyard.

Admitting his reasons for doing so, Harry — who shares Amelia and 23-year-old daughter Delilah Belle Hamlin with Lisa — said:

“Well, the pool is not for us. It’s so that the kids come back with their kids.”

Kyle, now 52 years old herself, took that as an opening to discuss the Disick-sized elephant in the room. Noting how she had her own first daughter, Farrah, when she was just 19 years old, Richards offered:

“Amelia’s 19 . That’s how old I was when I had my first. Can you imagine? So just so you know, it could be happening.”

Kyle!!! That’s not what this poor man needs to be hearing right now! LOLz! But, you know, she’s not wrong…

After saying “no” repeatedly and not looking too excited about Kyle’s observation, Harry and the rest of the party moved on. Later in the evening though, upon sitting down to eat, the cast members asked Harry and Lisa where their daughters were now. Delilah had been in Italy but more recently was in Tulum, Mexico, Harry revealed — and he explained that Amelia was heading to Cabo San Lucas herself, and then on to Tulum to meet up with Delilah.

When Dorit asked whether her 38-year-old beau was going to meet Amelia in Mexico, Lisa offered:

“I don’t ask a lot of questions right now. There’s a lot coming, you know, at us and I’m just being easy with it.”

Yeah — she’s not kidding, either!

In a confessional moments later, Lisa admitted that her own mother had seen gossip mag rumors about Scott and Amelia potentially being engaged already! Harry’s wife had to shut that down quickly, explaining:

“The press stuff that’s coming is, like, holy guacamole. My mom saw it in the market and called and said, ‘Is this true?’ I’m like, ‘Mom, no!’ But I mean, that’s what we’re dealing with.”

And finally, when the ladies asked Harry to tell them how he really felt about his youngest daughter’s high-profile romance with Kourtney Kardashian‘s baby daddy, Harry said:

“My feelings about it, I must confess: the issue that’s the most enduring is the age difference, which to me is odd. But, then again, every time I think of that, I think of myself and Ursula Andress. I was 14 years younger than she when we had Dimitri, so I can’t really complain, right?”

Not a bad point! FWIW though, Harry was 29 when he sired his son with the Bond girl — and not 19, like Amelia. So while it’s a reasonable comparison, it’s hardly the same.

What do U make of Harry’s reasoning on Amelia’s love life, Perezcious readers?!

And what do U think about the age difference between Amelia and Scott??