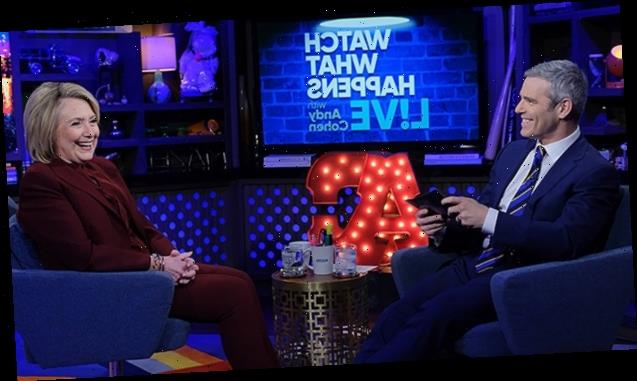 With Hillary Clinton sitting in his hot seat, Andy Cohen couldn’t resist asking what her ‘Real Housewives’ tagline would be. Fans loved seeing a more ‘loose’ and relaxed version of the former First Lady on the late night talk show!

There’s just as much drama on Capitol Hill as there is in a season of Real Housewives. Given that truth, Andy Cohen couldn’t resist relaying this question from Bravo to First Lady Hillary Clinton, 72, on the March 5 episode of Watch What Happens Live with Andy Cohen: “People wanted to know what your Real Housewives tagline would be?” It didn’t take long for Hillary to brainstorm the perfect one-liner.

“I’m neither as good or as bad as some people say,” the former New York senator cheekily answered. The perfect tagline, considering how much praise (and flack) Hillary was subjected to as she campaigned for president leading up to the 2016 election. Given that fans are more acquainted with seeing Hillary deliver talking points on the state of America rather than commentary on reality television, they were delighted with this change of scenery.

“This loose Hillary is very interesting,” one fan tweeted, who recapped the politician’s tagline. Bravo also shared a clip of Hillary pitching her tagline, and fans jumped into the network’s mentions to show their approval with comments like “OMG! I love love love @HillaryClinton…Hillary, made my night,” and, “That was great Hillary.”

In honor of Hillary’s visit, Andy also hosted a “Give Them Hill” drag pageant which delivered three looks on the WWHL runway: college Hillary, ’90s First Lady Hillary, and modern Hillary. It was an eventful show; at one point, Hillary and Andy even took “shotskis” together!

Hillary is currently promoting her new Hulu documentary, Hillary, which premieres on March 6. It’s a four-part docuseries that’ll give viewers an in-depth look at the former Secretary of State’s entire life and career in politics, told through interviews with Hillary herself and her close circle. HollywoodLife has watched the documentary ahead of the premiere, and we reported Hillary’s reaction to Bill Clinton’s affair with Monica Lewinsky!