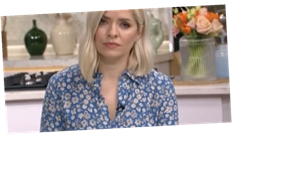 Holly Willoughby has defended Captain Sir Tom Moore’s family after they were criticised online for visiting the former army officer.

Captain Sir Tom, 100, raised £33million for the NHS and is currently being treated in a hospital in Bedfordshire as he’s being treated for pneumonia and coronavirus.

The family of former army officer, who was knighted for his fundraising efforts, have been trolled online after it was revealed they had joined him at his bedside as some hospitals have stopped loved ones from visiting patients.

One critic wrote on Twitter: “ah so it's OK to be with elderly family in hospital is it? Great, I'm off to visit my Dad”.

Another added: “Why can his family be with him when my mum can’t see her family and she’s got Alzheimer’s. he went to Barbados at Christmas with his family. I would love to take mum on holiday, but guess what, I can’t cause of covid.”

While a third said: “I’m sure tens of thousands of other people who have loved ones dying alone in hospital are chuffed to bits that his family get to see him”.

Holly, who recently opened up on her battle with dyslexia, chatted to royal correspondent Camilla Tominey via video link on This Morning on Tuesday 2 February, who defended Captain Sir Tom.

Camilla said: “One of the saddest parts of that 100,000 death toll was the number of people who did have to die alone.

“Captain Tom Moore is 100 years old and is in an ordinary ward, not ICU, being treated up in Bedford.”

She continued: “It's up to the hospital to allow visitors in or not.

“We shouldn't be piling on a family for whom they are going through an enormous trauma now because someone who is 100 is suffering after testing positive.

“He hasn't been able to have his vaccine because he's had pneumonia, that's an extra cause for concern.

“Frankly moving forward it is inhumane and immoral not to allow people to be with their loved ones in their hour of need in hospital.”

Blonde beauty Holly then added: “I think we can all agree.”

Captain Tom’s family previously shared a statement to announce his hospitalisation on Twitter.

It read: “I wanted to update everybody that today (Sunday 31 January) my father was admitted to hospital.

“Over the last few weeks he was being treated for pneumonia and last week tested positive for Covid-19.

“He was at home with us until today when he needed additional help with his breath. He is being treated in a ward, although he is not in ICU.

“The medical care he has received in the last few weeks has been remarkable and we know that the wonderful staff at Bedford Hospital will do all they can to make him comfortable and hopefully return home as soon as possible.”

Fatty liver disease symptoms: Watch out for spider angiomas on the skin – what are they?

Why was Max Clifford in prison and what were his offences? – The Sun