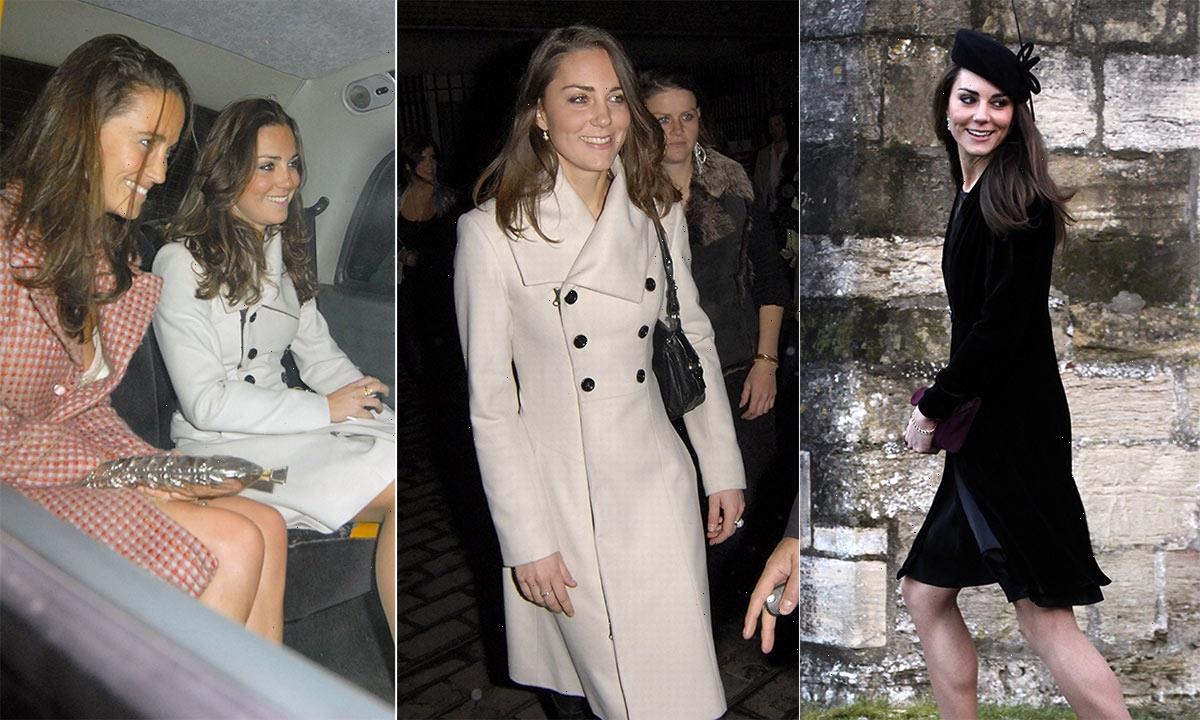 The Duchess of Cambridge is preparing to celebrate her 40th birthday on Sunday 9 January, and despite being one of the most photographed women in the world, Kate tends to spend the day quietly with her nearest and dearest.

It’s not known where William and Kate will mark the occasion – be it at their London base, Kensington Palace, or their Norfolk country home, Anmer Hall – but there’s no doubt the Cambridges will be joined by their three young children Prince George, Princess Charlotte and Prince Louis.

Let’s take a look at how Kate has celebrated her birthday in previous years, from long before she was a member of the royal family… Plus, see what beautiful gifts Prince William has given the love of his life.

Just weeks before her 25th birthday in December 2006, Kate and the Middleton family attended Prince William’s passing out parade at Sandhurst. The attention reached stratospheric levels, with many comparing Kate, who was dressed in a bright red coat and black hat, to Princess Diana.

When it came round to her actual birthday just days later in January, scores of photographers descended on Kate’s London flat in the hope of snapping the birthday girl. Clarence House was forced to release a statement, requesting that William’s girlfriend be left alone.

With the Prince once more on military duty in Dorset, it was left to sister Pippa to entertain Kate. He didn’t forget this girl, though. That year William’s gift to her was a green enamel Van Cleef & Arpels diamond-framed makeup compact, featuring a polo player about to hit a pearl.

The following year, Kate again spent her birthday without her royal boyfriend. She and her family enjoyed a meal out at Tom Aikens’ restaurant in Chelsea, London, after which the Middleton sisters headed to Kitts Club in Sloane Square. Kate and Pippa were seen leaving the club in a taxi together.

The party was still going a few days later when Kate attended a show with a group of William’s close friends including Tom van Straubenzee.

William surprised his girlfriend with a romantic candle-lit supper in a remote log cabin on the Balmoral estate in Scotland. He was eager to show his love how much she meant to him before beginning an intensive phase of military training. So the thoughtful royal arranged for them to dine at the isolated lodge on the banks of the River Dee. With the sound of the river roaring outside, they dined alone in the cottage which was once a hideaway favoured by William's great-grandmother, the Queen Mother.

In keeping with her classically elegant tastes, the Prince is said to have given his sweetheart cultured pearl earrings for her 28th birthday. The Telegraph reported that Kate “adored” her present but the earrings were chewed up and swallowed by the family cocker spaniel. It named the canine culprit as Otto, but later dog breeder Edith Christian Hepburne-Scott clarified that the Middletons’ pet is called Ella and Otto was given to another family.

“I have no concrete knowledge that even Ella ate these earrings,” she added. If it did happen Kate didn’t hold it against the pooch. Here she is pictured with Lupo, Ella’s son, who sadly passed away in November 2020.

On her last birthday without a royal title, Kate was happy to let someone else take the limelight. She spent that weekend at the wedding of her and William's friends Harry Aubrey-Fletcher and Sarah Louise Stourton.

On turning 30, Kate kept it simple. Since it was her first birthday after the royal wedding it was nigh on impossible to go out without attracting attention. "[She] had a quiet gathering with family and friends on Monday evening," a palace aide said. "The dinner was held within private quarters at one of the properties situated by their home at Kensington Palace."

Pregnant with Prince George, Kate battled severe morning sickness which meant she had to spend some time in hospital just weeks before her 31st birthday. The Duchess had been expected to stay at home but she ventured out with Prince William, her parents Carole and Michael Middleton and her siblings James and Pippa to see a Cirque de Soleil show, Kooza, at the Royal Albert Hall. They enjoyed the spectacle from the royal box.

The royal's 32nd birthday was a particularly special one; it was her first as a mother. Kate spent the day privately with her little family, relaxing in her country home Anmer Hall in Norfolk, where she and William chose to raise their son George in the earliest years of his life.

Later that month, Kate and George jetted to Mustique for a family holiday with the Middletons, while William remained in the UK for his university course in Cambridge.

In 2015, the Duchess was once again pregnant, this time with Princess Charlotte. Long gone were the days of clubbing in Sloane Square with her sister Pippa. Kate and her family celebrated quietly at their newly renovated ten-bedroom home in Norfolk.

Much like in recent years, Kate spent her 34th birthday in private, celebrating in a low-key manner at home. But this time, she was joined by the newest member of her family, baby Princess Charlotte.

Here Kate is pictured the day before her 35th birthday, attending church in Sandringham. The family relocated to London that year for the start of George’s school.

The Duchess, who was pregnant with Prince Louis in 2018, once again chose to mark the occasion out of the spotlight. She celebrated at home once her children George and Charlotte returned from school and nursery. Charlotte had just started at Willcocks Nursery School a few days prior. Here, the Duchess is pictured a few days before her birthday in Sandringham.

Anmer Hall was once again the setting for Kate’s special day in 2019. She had a casual, pre-birthday celebration at her country house with some of her closest friends, including James and Laura Meade (godfather to Princess Charlotte and godmother to Prince Louis, respectively), and her school friend Emilia Jardine-Paterson (godmother to Prince George), and Emilia’s husband David.

The group were pictured attending church at Sandringham a few days before Kate’s birthday.

While the Duchess had her actual birthday off, William was carrying out an engagement with London’s Air Ambulance on 9 January 2019. The charity, which is close to William’s heart, was celebrating its 30th anniversary that year. During his visit, the former air ambulance pilot heard from pilots, clinicians and paramedics about their experiences and the challenges they face operating in London.

In a lighter moment, William was also given a card for his wife, and quipped: “I did remember this morning, so I was okay.”

The Duchess once again hosted some of her closest friends at her country home in Norfolk, this time inviting William’s close pal Tom van Straubenzee and his then fiancée Lucy Lanigan-O’Keeffe, who is a teacher at George and Charlotte’s school, Thomas’s Battersea. James Meade and his wife Laura were again present, as were David and Rose, Marquess and Marchioness of Cholmondeley.

In keeping with tradition, the group of friends were also spotted attending church at Sandringham over Kate’s early birthday weekend.

Like many of us in 2020 and 2021, the Duchess spent her final 30-something birthday in lockdown. The Cambridges were once again at their Norfolk country house during the UK’s third lockdown, where Kate was reportedly treated to a tea party put on by her husband William and their three children. Who says lockdown birthdays aren’t fun?