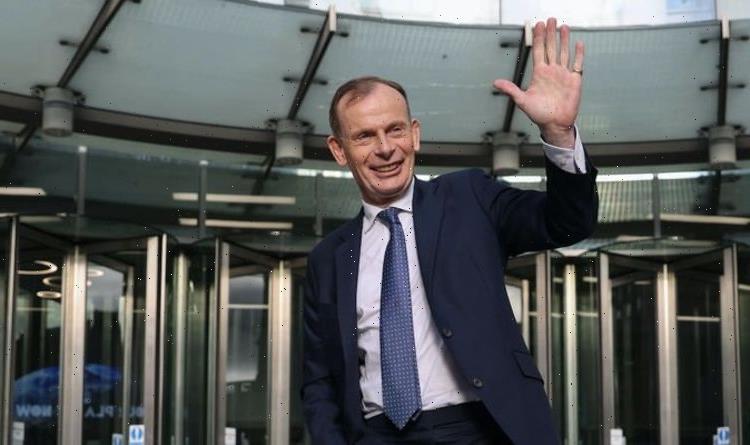 Mr Marr’s storied career with the BBC launched in 2000 when he became political editor. Since then, he has become a staple presenter, most notably for his flagship Andrew Marr Show every Sunday for 16 years from 2005 to 2021. He retired from the broadcaster in the December of 2021, concluding 21 years of work to find a voice of his own.

Where is Andrew Marr now?

Mr Marr announced he would “move on” from the BBC via a Twitter post on November 19 last year.

At the time, he told his 208,000 strong following he would leave behind “many happy memories and wonderful colleagues”.

He delivered his final appearance on the Andrew Marr Show on December 19.

Although now 62, Mr Marr is on track to establish an entirely new career.

Since announcing he would leave the BBC last year, he has expressed a desire to reclaim his voice.

The broadcaster expects presenters and journalists under its umbrella to foster neutrality in their role and eschew expressions of personal opinion.

Mr Marr’s upcoming role will keep him in the public eye whilst also giving him more freedom to communicate his views.

He will join Global, the parent company of radio stations LBC and Classic FM, to present for both shows.

His coverage will include primarily “political and cultural shows”.

He revealed in a statement that he also plans to write for newspapers.

Signing on with LBC would allow him to conduct “fast-paced, very regular political journalism” with “no filter”, he added.

And at Classic FM, he said he plans to explore his “love of classical music” and “culture generally”.

The broadcaster promised he would welcome some “surprising guests”.

He said he was joining a “young, hungrily ambitious and exciting company”, adding he couldn’t “wait to get stuck in”.

The decision to leave the BBC came after reports he hoped to escape impartiality and “daily online attacks” he received on social media.

Speaking to The Observer, one source said he wanted to shed “almost unconscious self-censorship”.

Neither LBC nor Classic FM have disclosed a prospective start date or slot for his new roles.

As Mr Marr moves on to new pastures, his flagship show will get a replacement presenter.

Sophie Raworth, another BBC veteran who joined the broadcaster some years before her predecessor in 1992, will take his place.

Ms Raworth has served as an interim presenter for Mr Marr in the past and is currently the face of BBC News At Six and Ten.

The BBC has announced her role is temporary, however.

Recruiters will continue looking for a “permanent presenter” while she serves in the interim and eventually relaunch with “a new presenter, title and a new look”.