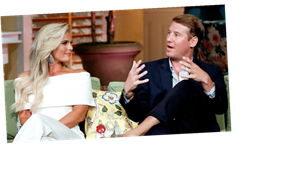 Are you confused by how in the world some fans could think Madison LeCroy’s beer Instagram is shade toward Austen Kroll? Allow me to explain the low-key drama. On Feb. 15, LeCroy posted a couple of pictures in herself holding a bottle of Budweiser as she sported a cropped Budweiser tee with jeans. Alongside the emoji featuring two beer glasses clinking, she paired the carousel of images with the caption, "King of beers."

While the post in and of itself doesn’t seem to overtly have anything to do with her ex Kroll, fans quickly recognized it as a call back to a comment Southern Charm cast-mate Patricia Altschul had made during the most recent season of their show. In the comment in question, Altschul claimed LeCroy deserved Budweiser rather than Kroll’s beer brand. Oh, and did I mention that Kroll’s beer brand just happens to be called King’s Calling Brewing Company? Yep, there are multiple levels of shade to be found here.

And fans were quick to pick up on all of them. One fan wrote in the comments section, "So much Austen shade 😂." Another chimed in, "Queen of bitters." Another wrote, "Oh the pettiness 🔥🔥🔥🙌🏽🙌🏽🙌🏽🙌🏽." One simply wrote, "Shade." Another noted, "So petty." Yet another wrote, "Omg the shade of it all 😂." And another chimed in by throwing out their own theory, "😂 thats either a shot at Austin or you are seeing one of the Anheuser-Busch boys."

You get the picture. Fans had a lot of thoughts. And they were not afraid to share them on LeCroy’s post.

To be fair, LeCroy has said in past interviews that she actually does like Kroll’s IPA, Trop Hop. The topic came up during a Jan. 11 appearance she made on Andy Cohen’s Watch What Happens Live. After she revealed that the last text she’d sent Kroll said "I hate you," LeCroy was asked whether or not she actually liked her ex’s IPA.

So, hey. Budweiser may be king. But it sounds like Kroll’s beer is good too?