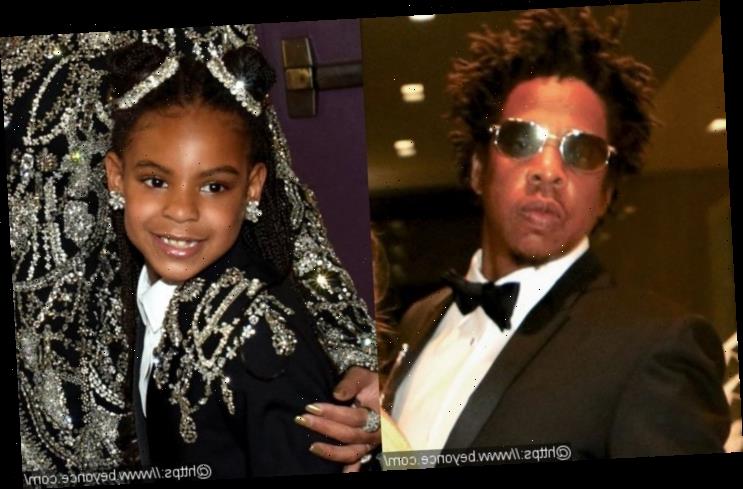 That aside, Hov seems to be enjoying his outing with his daughter, who looks stylish in an all-black ensemble that includes combat boots, black tee and black leggings.

AceShowbiz –Jay-Z would like it if people don’t get too touchy with him. The hip-hop mogul was caught on camera looking uncomfortable as a man tried to put his arm around the rapper when he and his eighth-year-old daughter Blue Ivy turned up at the Los Angeles Lakers match against the L.A. Clippers on Sunday, March 8 at the Staples Center.

In the now viral clip, Hov was seen was seen about to leave the venue as the game wrapped up. A man was then initiating a talk with the Roc Nation founder as he rested his arm around Jay and pointed at a camera which captured the moment.

At one moment, Hov let the arm linger around his shoulders but it didn’t happen for too long. The “4:44” hitmaker was later seen moving his body to get the man’s hand off him. Upon watching the video, fans couldn’t help but comment and some even called him “rude” for his action.

“Does anyone have any manners? To humiliate someone who is excited to see you is so low,” a fan took a jab at Hov. “It takes a very magnanimous individual to ensure others aren’t made to feel insignificant. He could have handled that a million different ways.”

Some people suggested that Hov was just being careful amid Coronavirus disease, but not all bought that excuse. “That was rude virus or not , he could of kindly asked him not to put his hand on him,” a fan argued. Echoing the sentiment, someone added, “This ain’t got nothing to do with the coronavirus. Do not FCKIN touch me lol.”

Meanwhile, some others admitted to being able to relate to Hov. “Yeah, I’m not with all of that overly friendly, touchy feely either,” one fan wrote. “I’m not letting no stranger walk up on me while I’m with my kid & just come put his arm around me just cause he smiling & jokin Fan or Not,” one other stated.

Someone, on the other hand, alluded that the man had invaded Jay’s personal space and he had every right to turn him down. “It’s called personal space, everyone does not like to be touched like that,” the person noted.

That aside, Hov seemed to be enjoying his outing with his daughter. The proud papa opted to wear wore a grey sweatshirt, gold chain and a Rhude baseball cap. The grade-schooler, meanwhile, looked stylish in an all-black ensemble that included combat boots, black tee, black leggings and a light-wash jean jacket.