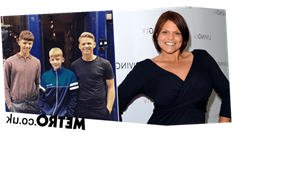 Jeff Brazier admits that it ‘pains’ him to know his sons Bobby and Freddie never truly knew their late mother Jade Goody as they were so young when she died.

Big Brother star Jade tragically died at the age of 27 in 2009 after a battle with cervical cancer.

She shared sons Bobby, 17, and Freddie, 16, with ex-boyfriend Jeff who she was not in a relationship with at the time of her death.

Reflecting on how the boys have coped with the absence of their mother, Jeff told The Sun on Sunday: ‘My gosh, they are just so resilient. Of course they were so young when she died [Bobby was five and Freddie was four] and it pains me to think they never knew Jade in the same way we all did.

‘When Bobby landed his first fashion magazine cover [for Man About Town] he said he hoped his mum was looking down on him and smiling. And I’m sure she was.’

Although they were too young to remember their mum properly, Jeff, 41, is proud that they have many of her positive traits.

‘When I look at Bobby and Freddie I see their mother’s colourful personality shining through,’ Jeff revealed.

‘I mean, Jade was one of the biggest characters out there and the boys have both inherited that from her.

‘All their best qualities come from their mum.’

Jade and Jeff’s eldest son Bobby has followed their footsteps in the spotlight after launching a modelling career earlier this year.

Perhaps nobody was more thrilled than Jeff, who was pleased his son was making his way in the world and taking the pressure off his parenting duties.

‘For the past 11 years it’s been all on me, the point I’ve got [Bobby] from school stage to work stage feels important and it’s freed something up for me,’ Jeff previously told Metro.co.uk.

‘I feel less pressure because he’s out there and doing things for himself. I like the idea of him now taking the reins and being on his way.’

The director of ‘Come Play’ centers a boy with autism in his new horror film, but says it’s not a movie ‘about’ the disorder

The director of ‘Come Play’ centers a boy with autism in his new horror film, but says it’s not a movie ‘about’ the disorder

What happens to Honey Mitchell in EastEnders?