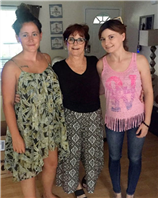 Jenelle Evans has worked very hard to portray herself as a victim.

These days, the bulk of her social media content is aimed at pushing the narrative that she’s never made a mistake in her entire life, and the media, the police, and her own family are engaged in a conspiracy to suppress the truth, which is that Jenelle Evans is the world’s best mom.

Lying comes as naturally to Jenelle as breathing, but to her credit, when she’s portraying herself as a put-upon saint, she seems to genuinely believe her own BS.

Delusion is a powerful drug, but at least it’s less harmful than some of the other intoxicants Ms. Evans has been known to indulge in.

It’s probably pretty easy for Jenelle to convince herself that the tabloid press and social media commenters are against her.

However, she might have a harder time buying into the idea that her immediate family is on the conspiracy.

But either Jenelle’s powers of delusion are the mightiest the world has ever known, or David Eason really talks a good game, because somehow, Evans has become convinced that it’s a good idea to burn bridges with the people who have been putting up with her BS for decades.

Currently, Jenelle is feuding with her mother, Barbara Evans, even though Babs has been taking care of Jenelle’s eldest son since he was a baby.

She also has a sister, with whom she is no longer on speaking terms.

Jenelle rarely talks about Ashleigh Evans, but since she’s running out of drama that might keep her semi-relevant, she opened up about her estranged sibling during a recent Instagram Q&A.

“What happened to your sister? Why don’t you talk about her? Why is she never in your videos?” one follower asked.

Jenelle was quick with a reply, and somehow, it involved Ashleigh being goth.

“Haha! So, yeah, about her. Me and her didn’t have the best relationship growing up. She had her own friends, I had my own friends,” Evans replied, as first reported by Starcasm.

“When we moved to North Carolina, things changed. She got into a gothic phase, and I was a high school cheerleader,” Jenelle continued.

“And we definitely didn’t get along then because it seems like my sister was jealous over me.”

Jenelle remains convinced that the entire world is jealous of her, and we guess that’s an easy delusion to maintain when you’re surrounded by abused animals all day.

Those poor creatures are probably envious of Evans, but only because she gets to eat every day.

“Later on in life I ended up on this show, and then things only got worse from there,” Jenelle continued.

“She has mental health issues. She sold me out to the tabloids making up stories that aren’t even true,” Jenelle rambled on.

“When something goes bad in my life, that’s the only time that she will comment on my life.

“So, I hope she’s doing well, but it’s better if I cut her off,” she concluded.

Obviously, there are many ridiculous aspects to that answer, not the least of which is the fact that Jenelle still thinks of herself as a cheerleader, and her sister as a pasty Joy Division fan.

It’s also funny that Jenelle refuses to mention Teen Mom 2 by name, referring to it instead as “this show.”

The idea of Evans ascribing Voldemort-like powers to a basic cable reality series will never not be hilarious.

But the best part of all of this is that Jenelle is still fixated on the sister she claims not to care about.

Ashleigh has yet to respond to Jenelle’s latest trash-talk, but in the past, she’s demonstrated an awe-inspiring ability to roast her to a crisp.

Take, for example, Ashleigh’s comments from when CPS took Jenelle’s kids away.

We can imagine Jenelle rolling her eyes and being like, “Ugh. Not having your kids taken away by the government is so goth.”

Then she probably took her old cheerleading costume out of the closet and got ready to perform some TikTok dances.